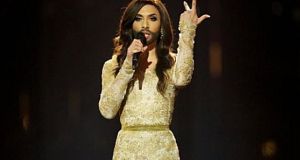 Turkey’s boycott of the Eurovision Song Contest for including gay and transgender performers such as bearded Austrian drag queen Conchita Wurst was criticised on Thursday as an attempt to “erase the LGBT community” in the country.

The country has not participated in the longest-running international annual TV music competition since 2012.

“As a public broadcaster we cannot broadcast live at 9pm, when children are watching, an Austrian with a beard and a skirt, who claims not to have a gender and says, ‘I am a man and a woman at the same time’,” said Mr Eren.

Turkey would return to the contest once this “confusion in mentality (is) corrected”, he said, according to a report by the state-run Anadolu news agency on Saturday.

“First they banned Pride in 2015, then the film festival in Ankara and now Eurovision. It’s an attempt to erase the LGBT community within Turkey.”

Despite legalising gay sex in 1858 under the Ottoman Empire, modern-day Turkey restricts certain gay rights. Same-sex marriages are not recognised, for example, and lesbians do not have access to IVF.

In July this year, Turkish riot police used tear gas and rubber bullets against activists who assembled in the capital Istanbul in protest at the gay pride ban.

Eurovision has a long tradition of LGBT presenters and performers. In 1998, Dana International became the first transgender performer to win the contest.

Wurst became a gay rights icon after winning the competition in 2014. She has since credited the show with being a “bubble of inclusivity and respect”.

“The Eurovision Song Contest’s values are of universality and inclusivity and our proud tradition of celebrating diversity through music,” said a spokesman for the European Broadcasting Union, which produces the show.

“TRT has made a huge contribution to the contest in the past, including hosting the event in Istanbul in 2004, and we would very much welcome them back should they decide to participate again,” added the spokesman added.