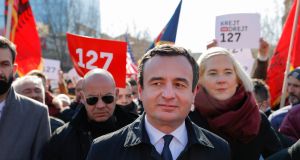 Leader of the movement Self-determination (Vetevendoje) and candidate for prime minister Albin Kurti at the closing electoral rally in Pristina, Kosovo on Friday. Photograph: EPA

Kosovo will hold parliamentary elections on Sunday that could mark power shifting decisively from veterans of its 1998-9 independence war with Serbia to a younger generation of politicians pledging to pursue reforms and end corruption.

Polls predict a comfortable victory for the leftist Vetevendosje (Self-Determination) movement, which could potentially secure a majority in parliament and become the first party to govern Kosovo alone since it declared independence in 2008.

Vetevendosje’s leader Albin Kurti is tipped to become Kosovo’s prime minister for a second time, a year after he took the helm of a fragile ruling coalition with the Democratic League of Kosovo (LDK) party that collapsed after just 50 days.

The split was ostensibly over the government’s handling of the coronavirus pandemic, but also reflected LDK unease over Mr Kurti’s anti-corruption drive and prompted the departure of the party’s most popular figure, Kosovo’s current acting president Vjosa Osmani.

Mr Kurti (45) and Ms Osmani (38) have now teamed up, creating a joint list of candidates for Sunday’s vote and uniting around key priorities for economic, social and political change with the aim of fighting graft and poverty.

A new government led by Mr Kurti would be expected to ask parliament to elect Ms Osmani as the country’s president, and surveys suggest the prospect of the reformist duo working in tandem appeals to many – especially younger – voters.

“Two decades of bad governance with failures and corruption, without jobs and without justice, must end on February 14th, to restore development and make progress. So we must all come out . . . to make the big difference,” Mr Kurti said recently.

In a legal quirk, he cannot run for parliament due to a 2018 conviction for throwing tear gas in parliament, but is not barred from holding high office.

During a turbulent 2020 for Kosovo, former president Hashim Thaci and ex-parliamentary speaker Kadri Veseli were indicted by a tribunal in The Hague over war crimes allegedly committed during fighting with Belgrade’s forces. The former guerrilla commanders deny the charges.

Their departure from the scene has added to the sense of generational change in Kosovo, away from ex-militants whose wartime service is revered but whose political record is tarnished by scandals, misrule and broken promises.

Before being indicted, Mr Thaci worked closely with Donald Trump’s White House to break the deadlock between Kosovo and Serbia, and was dogged by claims – which he denied – that he was open to a land swap with Belgrade to secure its recognition of his country’s sovereignty.

Mr Kurti, who rejects talks of territorial exchanges or concessions to Serbia, described new US president Joe Biden as “incomparably more progressive” than his predecessor said he had “no doubt who to support” in last year’s US election.