Covid-19: Germany to impose restrictions on travel from Austria and Czech Republic 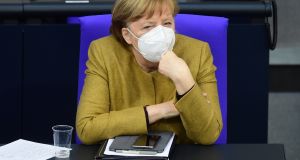 German Chancellor Angela Merkel looks on with a face mask on during a session of the German Bundestag on Thursday. Photograph: Clemens Bilan/EPA

More than 107.7 million cases of coronavirus have been recorded worldwide with more than 2.3 million deaths, according to the latest data from Johns Hopkins University.

Germany plans to impose restrictions on travel from Austria and the Czech Republic this weekend over concerns about aggressive mutations of the coronavirus, potentially disrupting cross-country commuters and commerce. The German states of Bavaria and Saxony have asked the federal government to establish border controls with the two neighbouring countries, Bavarian premier Markus Soeder said on Thursday. Interior minister Horst Seehofer was quoted as saying that the controls would come into force on Saturday night into Sunday and that chancellor Angela Merkel and vice-chancellor Olaf Scholz have given their blessing.

Dr Merkel urged Germans on Thursday to have a little more patience after agreeing with regional leaders to extend a coronavirus lockdown until March 7th and said restrictions would not last a day longer than necessary. Addressing the Bundestag, the lower house of parliament, Dr Merkel said the extension was needed to avoid a third wave due to the risk posed by new virus variants. “I know what we have achieved in our fight against the virus has had, and is still having, a high price,” said Dr Merkel. A gradual fall in daily infections has raised pressure for an easing of tight restrictions in place since mid-December and Merkel agreed with state premiers on Wednesday that some schools and hairdressers could open sooner than March 7th.

The Czech Republic earlier announced a stricter lockdown in three districts, including two on the border with Germany, where coronavirus infections have soared above 1,000 per 100,000 residents over the past week.

Victoria will enter a “circuit-breaker” five-day lockdown from Saturday in an attempt to “prevent a third wave”, Daniel Andrews has announced. The premier said on Friday afternoon the government would impose a snap lockdown from midnight because the “hyper-infectivity” and speed of a UK variant outbreak had created a “very real challenge”. Mr Andrews said this meant authorities had to assume there were “further cases in the community than we have positive results for” and the virus was “moving at a velocity that has not been seen anywhere in our country over the course of these past 12 months”. Venues to close include schools and universities, which will transition to home-learning, as well as hairdressing and beauty services and sport and recreational venues. Hospitality will move to takeaway only. All non-essential retail will also close, however essential businesses such as supermarkets, bottle shops and pharmacies will stay open over the five days. Funerals will be limited to 10 people and weddings must be postponed, the premier said. Despite the outbreak being limited to metropolitan Melbourne, Mr Andrews said the rules would apply to the whole state to avoid the new variant spreading to the regions. The Australian Open, which had been capped at 30,000 capacity, will continue without spectators.

New Zealand prime minister Jacinda Ardern said on Friday the country’s Covid-19 inoculation programme will likely begin on February 20th, brought forward by the earlier receipt of the Pfizer-BioNTech vaccine than originally anticipated.
Pressure has been mounting on Ms Ardern to start vaccinations for the country’s 5 million people to take advantage of its rare position of having virtually eliminated the virus domestically.

“Last year we indicated the vaccine would arrive in quarter two, and earlier this year we updated that to quarter one,” Ms Ardern told reporters. “It’s pleasing to be receiving doses this early in quarter one.”
Both New Zealand and neighbouring Australia have formally approved the vaccine jointly developed by US drugmaker Pfizer Inc and Germany’s BioNTech. Australia has said it expects to begin inoculations by the end of this month, without giving a specific date.

However, Ms Ardern said the vaccination programs would have no immediate impact on a stalled trans-Tasman travel “bubble”. Australia and New Zealand had hoped to allow bilateral travel by the end of March, but fresh coronavirus outbreaks in Australia have stalled those plans. Ms Ardern said border restrictions could be eased if there was evidence that vaccines reduce transmission.

“That will be a significant step-change if we see that evidence emerge and I’m sure that will make a difference to travel in the world,” she said. “But at this stage, it won’t necessarily make a difference.” Ms Ardern said New Zealand’s approximate 12,000 border workers would be the first to be vaccinated, followed by their household contacts. Healthcare workers and high-risk people like the elderly would be next, before vaccinations for the wider population start in the second half of the year. “We have pre-purchased enough vaccines to cover all New Zealanders and to do so for free, and the Pacific as well,” she said.
New Zealand’s medicines regulator is also in talks with AstraZeneca, Novavax and Janssen Biotech regarding approval for their Covid-19 vaccines.

A coronavirus variant identified in the Brazilian Amazon may be three times more contagious but early analysis suggests vaccines are still effective against it, the country’s health minister said on Thursday, without providing evidence for the claims.

The White House said on Thursday it is not currently considering any new domestic air travel restrictions to fight the coronavirus - a day ahead of a planned meeting with airline chief executives.

New Covid-19 cases in Ontario, Canada’s most populous province, are likely to rise again beginning in late February as a more contagious variant of the coronavirus spreads, and intensive care admissions could follow in March, a panel of experts advising the provincial government said on Thursday.

The first batch of Pfizer’s Covid-19 vaccine arrived in Japan on Friday, local media reported, with official approval for the shots expected within days as the country races to control a third wave of infections ahead of the Olympic Games.

South Africa has secured millions of doses of Johnson & Johnson and Pfizer vaccines to fight the highly infectious Covid-19 variant that is dominant in the country.

Kenya is going ahead with its plan to inoculate its citizens using AstraZeneca’s vaccine, while Zimbabwe has bought 600,000 shots from China’s Sinopharm, in addition to 200,000 China has donated.

- The European Commission has so far approved all requests for the export of Covid-19 vaccines, including to Britain, the United States, China and Japan, since it set up on January 30th a mechanism to monitor vaccine flows.

- AstraZeneca’s vaccine is not perfect, but will have a big impact on the pandemic, its chief executive officer predicted, as the drugmaker pledged to double output by April and the African Union gave its backing for the shot.

- Roche’s arthritis drug tocilizumab cuts the risk of death among patients hospitalised with severe Covid-19, also shortening the time to recovery and reducing the need for mechanical ventilation.

- Merck said it was in talks with governments and companies to potentially help with manufacturing of vaccines that have been already authorised.–Guardian, PA, Reuters, Bloomberg