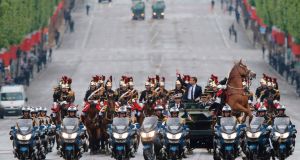 A horse rears as France’s new president Emmanuel Macron parades in a car on the Champs-Élysées after his formal inauguration ceremony in Paris on Sunday. Photograph: Michel Euler/AFP/Getty Images

“I will convince our compatriots that the power of France is not in decline, but that we are on the threshold of an extraordinary renaissance,” he said.

The world’s eyes are on France, Mr Macron said repeatedly. Alluding to the Brexit vote, Donald Trump and Marine Le Pen, the extreme right-wing leader he defeated on May 7th, he said, “Everywhere, people were asking if the French would fall back on an illusory past . . . turn their back on the Enlightenment, or if . . . they were going to embrace the future and give themselves a new élan.”

Mr Macron promised to “refound” and “relaunch” the EU.

“We will need a more efficient, more democratic, more political Europe, ” he said. “I shall work for that.”

At age 39, Mr Macron is France’s youngest president. “The confidence that the French have shown me fills me with immense energy,” he said. “I’ll be at work from this evening.” He is expected to name his prime minister on Monday, and will travel to Berlin to see German chancellor Angela Merkel on Monday afternoon.

“Liberating and protecting, that is how our future will be made,” he said later at Paris town hall.

Though Mr Macron often laments political bickering and the paralysis of “the system”, he refrains from casting individual blame. He paid homage to his last seven predecessors.

That left François Hollande, who had made Mr Macron a presidential advisor, then minister for the economy. On Sunday, all talk of betrayal was forgotten. Mr Macron said the 2015 Paris accord on climate change made Mr Hollande a “forerunner” and said he “protected the French in a world struck by terrorism”.

Thanks to Emmanuel Macron, Mr Hollande will not go down in history as the president who turned France over to the Front National. Mr Hollande waited on the steps of the Élysée as Mr Macron walked up the red carpet for his inauguration. Their eyes locked, and Mr Hollande broke into a smile.

During an hour-long private meeting, Mr Hollande is believed to have transmitted the codes for France’s force de frappe, and briefed his successor on the war in Syria.

Mr Macron walked Mr Hollande to his waiting car, and joined in applause for the departing president. Like François Mitterrand in 1995, Mr Hollande drove to the socialist party headquarters, where he claimed to have left the country in better condition than when he took office.

There was a sense of a generational putsch, of power having skipped politicians in their 40s and 50s. Mr Macron referred repeatedly to future generations. “We shall fight not only for this generation, but for generations to come . . . We must build the world that our young people deserve.”

“I don’t believe in a ‘normal’ president,” Mr Macron said last October. “That’s not what the French want. On the contrary, the concept destabilises them, makes them feel insecure.”

The president of the constitutional council, Laurent Fabius, called on Mr Macron to “calm anger, heal wounds, lift doubts, trace a path and embody hope. Your success will be the success of France.”

“I know that the French expect a great deal of me,” Mr Macron said. “They are right . . . Nothing will weaken my determination.”

During the campaign, Mr Macron’s critics questioned whether such a young man was capable of leading France’s armed forces. In the police and military, support ran high for Ms Le Pen. France is still under a state of emergency.

That may explain the martial feeling of much of the ceremony. In the Élysée garden, Mr Macron stood to attention before army, air force and navy contingents, while the Republican Guard band played the Marseillaise. In the afternoon, he visited wounded soldiers at the Percy military hospital. Unlike his predecessors, Mr Macron made his inaugural drive up the Champs-Élysées standing in a military command car.

After laying a wreath at the tomb of the unknown soldier, Mr Macron shook hands with the crowds around the Arc de Triomphe, where a man with links to the extreme right tried to assassinate president Jacques Chirac on Bastille Day 2002.

The walkabout on the Champs-Élysées and a second session outside Paris town hall in the afternoon must have given Mr Macron’s security detail cold sweats.

“You can’t listen to the security guys,” Macron told staff who tried to dissuade him from confronting angry factory workers between the two rounds of the presidential election, as shown in a TF1 documentary last week. “I’ll never be safe, because that’s the way the country is now. You have to take the risk,” Mr Macron said. “Because if you listen to the security guys, you end up like Hollande. You may be safe, but you’re dead.”

At his last engagement of the day, Mr Macron spoke to 800 French officials and foreign diplomats at Paris town hall. He made peace with the socialist mayor Anne Hidalgo, who opposed last year’s labour law and who supported the socialist candidate Benoît Hamon against Mr Macron. The new president agreed to join Ms Hidalgo’s campaign to hold the 2024 Olympics in Paris.

Paris is “the beating heart of our country”, Mr Macron said, “A wounded heart, that has paid a heavy price to terrorism.”

He praised Ms Hidalgo’s generous response to the refugee crisis, and for making Paris “a major actor against climate change”.

Implicitly recognising the hold of the far right over much of rural France, Mr Macron said it wasn’t enough to recognise successful areas of the country. He had to “enable every town, every department, every region to become successful too. This reconciliation of all France will be the heart of my mission.”