Italian villagers are overwhelmed by scale of quake tragedy 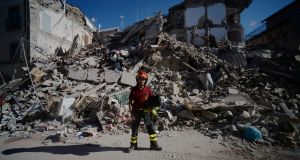 Ruins in a street of Amatrice in central Italy after the earthquake, which claimed at least 247 lives. Photograph: Filippo Monteforte/AFP/Getty Images

On the day after Wednesday morning’s earthquake in which more than 250 people lost their lives, there was an awful sense of desolation, pain and hurt in the little hill village of Amatrice.

This Apennine paradise high in the hills was coming to terms with the human cost of this most recent devastating Italian earthquake.

Walking into what remains of the town from the “mountain” side, one of the first buildings you pass is the Don Minozzi old people’s home.

Much of the huge rescue army that has gathered in Amatrice is parked on the football pitch beside a former orphanage attached to the home.

There is a new set of tents, a sort of portable mortuary. People queue up to identify the bodies of relatives and loved ones.

Sometimes, there are no relatives still living and it falls to the town mayor, Sergio Perozzi, to identify the body – if he can.

One of the tents is marked “persons unknown”. On a low wall just beside the mortuary, relatives sit, some in a daze, some weeping openly, all of them overwhelmed by the tragedy that has hit this town of some 2,600 inhabitants.

I bump into Carmela, mother of Alessandro, who went to school in Rome with my daughter, Roisin.

She is here to comfort her sister-in-law Cristina, who lost her mother, a brother and a sister-in-law when the family home collapsed in the quake.

She and her young child managed to get out of the house because she had slept upstairs in the attic bedroom.

When the house collapsed, she found the strength to push a wooden beam aside and jump to the ground from the roof of the house – which, by now, was close to the ground. The rest of the building had been completely squashed.

Down the road is Don Fabrizio, aide to the bishop of Rieti, Don Dominio Pompilli.

He says the bishop spent the morning moving through the mortuary tents, anointing and blessing the dead.

As Don Fabrizio talks, he salutes local woman Maria Presede, yet another person with a harrowing story to tell.

When the earthquake struck, she and her husband were unharmed, with their well-built house suffering little damage. Maria’s husband immediately thought of his two sisters, who live on the other side of the road, just 20 metres away around the corner.

There he found that where there had once been a splendid house, there was now a pile of rubble. Beneath the rubble, his two sisters are now officially missing, presumed dead.

Local parish priest Don Savino D’Amelio tells one of the few positive stories of the last two days in Amatrice.

Along with two others, he managed to get 27 elderly people, some in wheelchairs, out of the old people’s home within two hours of the earthquake.

Both he and Don Dominio, say that the hardest moment for them as pastors will come when the media spotlight no longer shines on Amatrice, perhaps next winter, when the temperatures sink to well below zero.

Fabrizio Curcio, head of the civil protection agency, looks like a very tired man. He is very pessimistic about the final death toll here.

He admits that the huge rescue effort is perhaps just a bit too huge and that perhaps he could do with a reduced task force here.

The roads around Amatrice at times seemed clogged to well past the point of viability, yet the rescue work goes on, even if at this stage weary rescue workers assure me that the possibility of pulling anyone out alive is very low.

Yesterday, too, we heard the first reports of theft in the town, with professionals allegedly moving in, sometimes after dark, to enter abandoned homes, looting whatever they can find.

Rescue workers and journalists alike were alarmed by some of the 400 aftershocks that have been experienced in Lazio, Umbria, Le Marche and Abruzzo since the original shock on Wednesday morning.

At one point, the grandstand of the Amatrice football ground began to shake violently, with bits of the old orphanage at one end of the ground crashing down due to a tremor measuring 5.3 on the Richter scale.

Meanwhile, even if many people still prefer to sleep in their cars, a tented city complete with electricity, loos, a sewage system, a huge field kitchen, hot water and showers has been prepared.

If the experience of L’Aquila, seven years ago, is anything to go by, then the sfollati (the homeless) could spend up to six months in these residences.

Further down the town, Paola is busy trying to sort out a mountain of food and clothing supplies, which have arrived via donations from all over Italy. Paola, like many others, slept in her car last night.

As she rummages among endless boxes of tinned beans, lentils, peas and other foodstuffs, she has the look of someone going through the motions, glad to have something to keep her mind off both her recent awful experiences and her now uncertain future.

What will she and her husband do? Will they stay here?

“Of course, where else would we go? People have to stay here, people have to get the town up and running again,” she says.

Their ability to sniff out a human body – dead or alive – as they have been trained to do lasts for just two or three days.

The dust so clogs up their sensitive noses that they have to be pulled off the job and moved to a clean-air environment.

Although it means little to the rescue teams, word comes through that state attorneys in Rieti have opened investigations into alleged illegal building and related manslaughter in both the towns of Amatrice and Accumoli, two of the worst hit. But that is a story for another day.