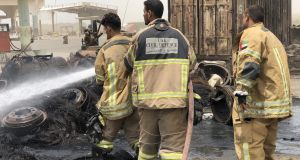 The seizure of the port city of Aden by South Yemeni separatists has deepened fundamental divisions between the chief regional partners in the devastating war in the poorest country in the region. Divisions are over aims, strategies, allies, and whether to continue the war.

By taking control of Aden, the seat of the Saudi-sponsored Yemeni regime, the Emirates’ separatist allies have dealt a decisive blow to the Saudi war aim of dominating a united Yemen if and when the northern Houthi rebels are defeated.

The Saudis have adopted a strategy that their Emirati partners could not, ultimately, tolerate. From the outset of the war, Saudi-backed president Abed Rabbo Mansour Hadi had no credibility in Yemen or with the Emiratis who have repeatedly called for his replacement. He was elected unopposed in 2012 for a two-year term, which was extended until 2015.

He and most of his ministers live in Riyadh and have been dubbed the “government of the hotels” by detractors. The Saudis have also adopted Yemen’s Sunni fundamentalist Islah party as the vehicle to rule Yemen. The Emiratis regard Islah as an offshoot of the Muslim Brotherhood and therefore their enemy.

Saudi crown prince Mohammed bin Salman appears determined to prosecute the war until he secures military victory. The Emiratis have adopted a competing war aim and strategy. They seek to gain control of Aden and ports along the Gulf of Aden and the Red Sea in their quest for expanding their influence into the Horn of Africa. To this end, they have been training and arming diverse militias, including separatists who abhor Islah and seek to redivide Yemen, which was unified in 1990 after a bitter civil war.

In recent weeks, the Emiratis have begun to withdraw troops from Yemen and to call for a negotiated end to the war. The Emirati withdrawal makes it all the more difficult for Saudi Arabia to sustain the war effort since Emirati troops and allies have served as the main ground forces while the Saudis, whose expensive army is not a fighting force, have conducted attacks from the air.

Meanwhile, the Houthis are not only defending territory they hold but also mounting attacks in the south and lobbing rockets and mortars into Saudi Arabia.

The divisions go beyond Yemen. While the Saudis continue to see Iran as their regional antagonist, the Emiratis have refrained from blaming Iran for sabotage operations against oil tankers in the Gulf. They also held talks with senior Iranian officers on the situation in the flashpoint Strait of Hormuz, where war could erupt between Washington and Tehran.

Fearful of being caught up in a war, the Emiratis seek dialogue rather than confrontation with Tehran. They depend for their high standard of living on foreign workers, external investment, transit travellers and east-west trade, as well as oil revenues. A war between Iran and the US could devastate the Emirates.

To paraphrase the head of Lebanon’s Hizbullah group, Hassan Nasrallah, people who live in glass tower blocks should avoid warfare.