Irish refugee opt-in sets us apart from Britain and Denmark 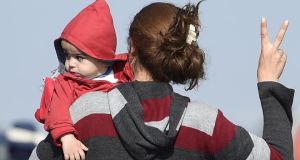 Refugees arrive from Hungary after crossing the border in Nickelsdorf, Austria on Thursday. Photograph: Helmut Fohringer/EPA

Ireland’s decision to opt-in to the EU’s relocation programme for migrants is likely to be welcomed by other EU countries which have backed the plan, though the European Commission said this morning that it would not comment on individual countries.

By choosing to opt-in to the EU’s relocation programme for migrants, Ireland sets itself apart from Britain and Denmark who have decided not to participate. Britain and Ireland have an exemption from most EU justice and home affairs legislation, and must opt-in if they want to participate. Denmark has an automatic “opt-out” and is not expected to take part.

The announcement this morning that Ireland is to accept 4,000 refugees, around 2,900 of whom will be part of the Juncker relocation programme unveiled on Wednesday, has already been picked up by some international media outlets this morning. It will also impact the figures published by the European Commission.

Under the Commission’s calculations published on Wednesday, Germany was to accept 31,443 migrants, France 24,031 and Poland 9,287 and so on based on a formula, or “distribution key” taking into account GDP, population size, number of previous asylum applications and unemployment rate. These figures will now be revised in light of the Irish decision.

By opting-in to the EU’s relocation plan, Ireland must also abide by the EU’s distribution key - under the EU’s formula, population is given a 40 per cent weighting, GDP accounts for 40 per cent, with the remaining 20 per cent is divided among unemployment rate and the average number of asylum applications over the last four years. All figures are provided by Eurostat, the EU’s statistics agency.

Thus while the 2,900 figure offered by the Government is expected to be presented by Minister for Justice Frances Fitzgerald on Monday at an emergency meeting of Justice and Home Affairs Ministers, these numbers could be subject to change as the technicalities of the ‘distribution key’ are worked out.

Irish officials from the Department of Justice will be working with officials in Brussels and with officials from other countries ahead of next Monday’s meeting, on the technicalities of the distribution key. As Ms Fitzgerald also indicated today, the European Commission will be playing a central role in deciding which refugees are allocated to each country.

Further, there are specific legal technicalities applicable to the Irish case because of the opt-in. Technically, the Cabinet’s decision to accept more refugees will be subject to a Dáil vote, which can only be taken once the Council of the European Union officially takes a decision.

The Council decision on Juncker’s May relocation programme will only be officially taken next week, following the European Parliament’s decision to back the plan yesterday in Strasbourg, which means that the Dáil is likely to vote on the plan shortly after. A vote on the latest programme is likely to take place much later.

In addition, on a broader level there are still serious concerns among some member states about the EU’s relocation plan, which is mandatory.

Crucially however, the EU is likely to secure the “qualified majority” - a weighted system of voting - to pass the legislation, following the decision of big countries like Spain and France to back the plan. But the dissent of a number of smaller central and eastern European countries is still significant - as always, the EU will want to secure as much consensus as possible in arriving at a final migration relocation plan, even if that means making concessions to member states with the most concerns.