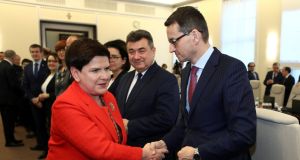 Polish-Irish relations are poised to take an interesting turn amid speculation that Mateusz Morawiecki, economics and finance minister – and a one-time honorary Irish consul in Poznan – is on course to be the next prime minister in Warsaw.

Such a promotion for Morawiecki, once chief executive of AIB’s Polish subsidiary, is part of a wider cabinet reshuffle reportedly planned by Jaroslaw Kaczynski, head of the ruling Law and Justice (PiS) party.

After weeks of speculation, Polish prime minister Beata Szydlo stoked up rumours she was sitting on packed boxes after a party meeting on Monday night.

In a late-night tweet on Monday, viewed as a valedictory message, she wrote: “Above all, Poland is the most important, [a country which] takes care of family and values and is secure. Which grows from a basis of Christian values, tolerant and open. Modern and ambitious. That is my country.”

Szydlo led the national conservative PiS back into power two years ago with an absolute majority government and has overseen judicial reforms that have sparked an ongoing legal battle with the European Commission and widespread concern around the EU.

Following Szydlo’s tweet, Warsaw’s rumour mill upped a gear when Morawiecki cancelled a trip to Brussels on Tuesday morning for urgent talks in the Polish capital.

According to the Rzeczpospolita daily, the Warsaw reshuffle is likely as early as next week, with Morawiecki the most likely candidate for prime minister.

Since leaving business to enter politics in 2015, the 49 year-old has earned a reputation as a competent and safe pair of hands.

After four months as an independent government minister he became a member of PiS and is now considered a Kaczynski confidante.

He is already the most influential government minister, overseeing the budget, public spending, EU funds and overall economic policy.

He put his stamp on – and name to – an economic plan aimed at simulating economic growth to pay for a new monthly allowance of 500zl (€119) per child for families.

A Catholic from a staunchly anti-communist family, Morawiecki is the son of Kornel Morawiecki, a founder of “Fighting Solidarity”, a radical splinter of the union movement that brought down communism.

A decade ago, when Poland was gripped by economic upheavals under another PiS government, he told The Irish Times that the Polish economy was “clearly quite immune to politics”.

“It’s a sign of maturity of the Polish economy,” said Morawiecki, then chief executive of Bank Zachodni WBK, which was sold by AIB in 2010.

A decade on, his wisdom appears to hold: despite uncertainty in a rule-of-law row with Brussels, the Polish economy is firing on all cylinders with forecasts of more than four per cent this year, the highest in six years.

Nor has the political turbulence hit the ruling party’s popularity: it currently stands at 45 per cent in opinion polls, up almost 10 points from its 2015 election result.

But the likely reshuffle – and Morawieck’s possible promotion – comes at a delicate juncture in Polish politics.

The government’s controversial judicial reforms are likely to enter its final act this week, and the national conservative ruling party is renewing efforts to tighten up abortion regulations.

Meanwhile, Morawiecki’s Irish links and rumoured appointment as prime minister could soon put him in a delicate position, given Poland will side against Ireland in its EU court appeal against a European Commission ruling that Apple owes the Dublin government €13 billion in back taxes.

Regardless of how the reshuffle plays out, all PiS politicians in Poland know the golden rule of the top government job: a PiS prime minister’s power is borrowed.

The last word rests with PiS leader Jaroslaw Kaczynski who, despite energetic denials by his ministers, pulls the governmental strings from the background.

And not everyone is convinced that the ex-Irish consul is a shoe-in for the top job in Warsaw. Some point to a decade-old precedent, when Kaczynski ousted the then PiS prime minister to take the top job himself.