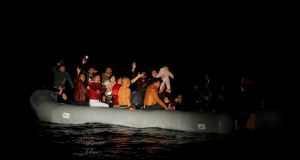 Migrants wave and shout for help following a failed attempt to cross to the Greek island of Lesbos. Photograph: Reuters/Umit Bektas

An Irish doctor who was part of a group of healthcare professionals attacked by local men on the island of Lesbos last weekend says many of the doctors and nurses who had travelled to Greece to volunteer in the Moria refugee camp have left in recent days.

Dr Nicola Cochrane, a GP from Greystones who travelled to Greece last week to spend a month volunteering with the Kitrinos healthcare charity, was only able to return to the Moria refugee camp on Thursday morning, four days after violent clashes across the island led to attacks on NGO workers and medical volunteers.

On Sunday, the vehicle she was travelling in was attacked by Greek men on motorbikes who smashed the window with “planks of wood and baseball bats”. The group attacked five cars carrying doctors, nurses, psychologists, a pharmacist and a translator.

The Moria medical team, which has dropped from nine to three doctors, was “warmly welcomed” by residents in the camp on Thursday morning. However, Dr Cochrane found many of the more vulnerable patients had suffered during their absence.

“We have lost a lot of people,” she told The Irish Times, adding that two doctors from Donegal who had arrived in Lesbos at the weekend have since returned to Ireland. “We were down to a total of 13 staff today and there’s only three doctors and three nurses left.”

Dr Cochrane found that one of her patients, a young man recovering from abdominal surgery following a stab wound, had deteriorated during the week. “He had a big surgical wound and it was sore when I saw him last on Saturday but was healing well. He’s now very unwell and the wound definitely has an infection. My immediate concern is he’s going to have to go back into hospital.”

The Moria camp has capacity for about 3,000 people, however, reports from the area estimate somewhere between 13,000 and 19,000 people are residing in the makeshift compound.

Thousands of migrants have crossed the border into Greece in recent days since Turkey’s decision to reopen its European border. Officials in Ankara have accused Greek forces of shooting dead four migrants and wounding more than a hundred at the border, a charge rejected by Athens. Meanwhile, Greece has banned vessels from sailing around the islands of Chios, Lesbos and Samos.

Dr Cochrane said she had noticed a “more robust police presence” on the island since Sunday and says the authorities are immediately deporting any refugees arriving by boat.

She is taking extra precautions by personally imposing a 6pm curfew on herself and can hear, from her apartment in the coastal town of Mitlini, the nightly anti-immigrant rallies taking place after dark by the port.

Questions have been raised as to who these young Greek men are given that most residents on the island are quite elderly, she said. “It’s like in the west of Ireland, younger people have gone to Athens for work and over time this became a place with only an older population. These young Greek men have appeared as if by magic.”

Dr Cochrane has also noticed refugees waiting at the port to board ferries to the Greek mainland. “There’s rumours going around among refugees that they will be able to move on through Europe and it’s not true. And if these people are around the port with all their belongings it means they’ve lost their space in the camp. If they travel to Athens and don’t sign on here they’ll lose their place in the asylum process.”