Ireland left out as EU opens borders to 15 states including Australia, Canada and Japan

The State was invited to take part, but could only do so if Britain agreed due to open border 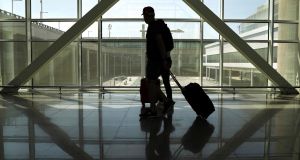 European Union member states approved a list of 15 countries around the world that are deemed safe for travel, agreeing that member states should open their border to them for all travel from Wednesday.

Unusually among EU member states, Ireland is not part of the agreement because it is not in the Schengen area of free travel and has a Common Travel Area with the United Kingdom.

Ireland was invited to take part in the joint agreement, but could only do so if Britain also agreed due to the open border, and it opted not to do so, The Irish Times understands. Denmark is also opting out.

China is also to be included, as long as Beijing agrees that EU citizens will also be allowed to travel there in turn.

To qualify countries needed to have coronavirus infections that were close to or below the EU average, and to open their borders to EU citizens in turn, but political considerations also came into play.

Agreement on the list of countries was repeatedly delayed as countries struggled to forge consensus, with divisions between countries with large tourism industries which pushed for greater opening and those which were more cautious.

The United States was not included due to pervasive level of coronavirus infections there.

The list is expected to be reviewed every two weeks, and countries could be removed from the safe list if their epidemiological situation changes.

To take part, Ireland would need to close off travel to all states but those on the “safe” list. The agreement notes that it “also includes Ireland and the United Kingdom if they decide to align”.

While the Schengen countries opted to jointly close their borders to travel from outside the EU on March 17th, Ireland went its own way, maintaining open borders while requiring arrivals to quarantine for two weeks.

Due to the quarantine, which also applies to arrivals in Ireland from EU member states, several countries in the EU including Germany, France, the Netherlands and Denmark advise their citizens against non-essential travel to Ireland.

“Ireland meets the criteria for low infection rates in the new travel guide model, but we still advise against any unnecessary travel to Ireland because there is a 14 day home quarantine for people traveling to Ireland from abroad,” the advice to citizens on Denmark’s foreign affairs ministry reads.

Asked whether it was a concern that some EU countries could have greater ease of travel with the 15 global countries than with Ireland, the Irish Department of Foreign Affairs and Trade said the situation would be subject to review.

“In accordance with government policy, which is based on official public health advice, the Department of Foreign Affairs continues to advise against all non-essential travel overseas. This includes Great Britain but does not apply to Northern Ireland,” a foreign affairs spokesman said.

“This advice is subject to review and as per recent statements the Government is giving consideration to a possible roadmap for the resumption of international travel.”.

Countries taking part in the agreement are free to impose additional precautions on these travellers, such as requiring them to quarantine.