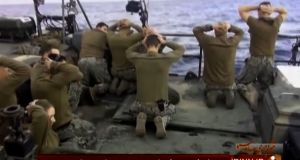 Video image showing US sailors after being apprehended by Iran’s Revolutionary Guards: Iranian and American officials said that the prompt release of the sailors was the result of the strong working relationship but images of the sailors with their hands behind their backs and on their knees could spark a backlash in the US Congress. Photograph: IRINN/HO/AFP/Getty

Iran has released two US navy patrol boats and 10 crew members who were taken into custody on Tuesday after Tehran said they strayed into Iranian waters “unintentionally”.

The swift resolution to the incident in the Gulf appeared to remove a potential flashpoint between the two countries just days before last year’s landmark nuclear deal is to be implemented.

Iranian and American officials said that the prompt release of the sailors was the result of the strong working relationship built up during the nuclear talks between John Kerry, the US secretary of state, and Mohammad Javad Zarif, the Iranian foreign minister.

However, images broadcast in Iran of the US sailors being detained with their hands behind their backs and on their knees could spark a backlash in the US Congress. The two governments also appeared to disagree over whether an apology had been issued.

Iranian analysts credit the centrist government of Hassan Rouhani and the Kerry-Zarif relationship for convincing the Islamic regime to quickly resolve the incident.

“Conditions have changed now. Iran does not want to create any tensions in an already volatile region, and Iran can directly talk to the US administration,” said Nasser Hadian, a professor of international relations at Tehran University.

“The phone calls between Zarif and Kerry worked extremely well and prevented an escalation. This is a huge asset for the two countries now.”

“The Guards could easily have taken a tough stand and shot at the US vessels or kept the sailors for two weeks to do more investigations,” said Mohammad Marandi, head of the state-run Faculty of World Studies in Tehran.

“But the Guards didn’t do that,” he said, “while at the same time they showed the world how powerfully they defend our national sovereignty.”

The incident took place at a sensitive time, with the nuclear deal that was reached last July between Iran and the six major powers – the US, UK, France, Russia, China and Germany – about to come into force. This will lead to the lifting of crippling oil and banking sanctions against Tehran.