The Spiritans, or Holy Ghost Fathers, lost 18 priests during the pandemic

Members of the clergy have been badly affected in the pandemic, given their age profile and lives in congregated settings. The Spiritans, better known as the Holy Ghost Fathers, have lost 18 priests in Ireland in the last year. 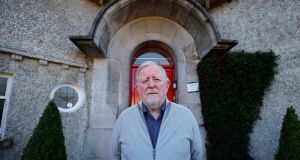 Fr Martin Kelly, provincial of the Spiritans: ‘These men’s lives carry their own value for those who care to look.’ Photograph: Nick Bradshaw/ The Irish Times

Covid-19 has had its deadliest impact on older people, particularly those living in nursing homes. It is not a surprise then that members of the clergy have been badly affected in the pandemic, given their age profile and lives in congregated settings.

Four Jesuits, four Oblate fathers, four Augustinian priests, six nuns in the Holy Order Convent in Kildare and four nuns at an unnamed convent in the southwest are among those who have died.

The worst-impacted order appears to be the Spiritans, better known as the Holy Ghost Fathers, which has lost 18 priests in Ireland during the pandemic – seven during the first wave and 11 in the third.

Fr James (Jim) Delaney died a few days after being given the vaccine, which came too late for him and others. There was a funeral every day at the order’s church in Kimmage Manor, Dublin in the first week of February.

It was a terrible time, says Spiritan provincial Fr Martin Kelly, as there were no wakes, no chances to concelebrate Mass together or to collectively mourn the passing of brother priests.

“It was overwhelming, one after the other,” Fr Kelly said. “We thought we would all be wiped out. I know that every funeral takes three days to organise, you don’t do much else. To have seven people in five days die was such a massive load... They were extraordinary men.”

The Spiritans run some of Ireland’s best-known schools, including Blackrock College and St Mary’s College in Dublin and Rockwell College in Co Tipperary. These have produced generations of Irish rugby internationals, judges, captains of industry, doctors, lawyers and politicians. Eamon de Valera was educated at Rockwell and worked as a teacher at Blackrock.

The order had a retirement home in Kimmage for 25 priests, but when it was no longer economical the residents were moved to nursing homes, many of which have been hit hard by Covid-19.

All but one of the Spiritan priests who died (Fr Seamus Galvin, who taught at St Michael’s College and Templogue College) had been missionaries. Several, including Fr Val O’Brien, were arrested and jailed by Nigerian authorities during the Biafran war of the 1960s.

Their deaths mark the passing of a way of life in Ireland. The Spiritan priests who died were all in their 80s and 90s. They spent most of their lives abroad, serving in in Nigeria, Gambia, Sierra Leone, Kenya, Tanzania, Brazil and the US. The average age of the remaining 130 Irish Spiritan priests is 77. The last ordination was in 2018, a 56-year-old Catholic convert from China.

Many of the clerics who died during the pandemic were products of a boom in vocations which lasted until the mid-1970s, a time when many Irish Catholic homes had a priest or nun away “on the missions”. These men and women went to the developing world and worked in hospitals and schools, founded churches, tried to improve agricultural practices, said Masses and provided comfort.

Many families produced multiple vocations. Fr Tom Cunningham from Co Tyrone, who died in January, had two brothers in the Spiritans, one in the Dominicans and a sister who was a nun. Fr Brendan Heeran from Leitrim had four sisters who were nuns.

“It arose out of a context that no longer exists – often large families and less options at home,” Fr Kelly said. “Instead of the boat to Holyhead, they got on the boat to Freetown, Port Harcourt or Mombasa... It’s hard to imagine such a stream of altruism flowing again in Ireland.”

Many missionaries were motivated by a desire to save souls, Fr Kelly believes, growing up with the doctrine “extra Ecclesiam nulla salus” (there is no salvation outside the church). Others were motivated by a sense of idealism, similar to that which propels today’s youth to demand action on climate change and protection for refugees.

“They went with that spirit of adventure and discovery, which seems a perennial trait of youth in every generation,” Fr Kelly said.

This side of the Irish Catholic Church has been obscured by the stream of abuse scandals in recent decades. While few miss the domination of a church that led to such a harvest of vocations, the times did breed much self-sacrifice.

“These men’s lives carry their own value for those who care to look,” Fr Kelly said. “Yes they are dimmed by the shameful lives of some [members of the] clergy, but these men did not do what they did for public acclaim.”

Two weeks ago most of the remaining Spiritans were vaccinated, and there are tentative hopes the order has come through the worst of the pandemic.

“I don’t let my hopes get too high with Covid-19, but it has given us all a great lift,” Fr Kelly said.