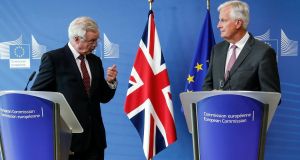 European Commission president Jean Claude Juncker delivered a firm rap over the knuckles to the UK as the third round of Brexit talks got under way in Brussels on Tuesday.

Responding to repeated subtle and not so subtle attempts by the UK to accelerate the talks process into their second trade phase, Mr Juncker repeated the mantra of his chief negotiator Michel Barnier in insisting there could be no question of moving on to discussions about the future relationship between the EU and UK until a divorce settlement had been agreed.

“We cannot mix these things up,” he said, while acknowledging there was some overlap in the issues.

Not least in that regard, he mentioned Northern Ireland, dismissing the UK position on the Border as far from definitive. He said he found none of the UK policy papers reassuring.

“I would like to be clear that I did read with the requisite attention all the papers produced by Her Majesty’s government; I find none of them truly satisfactory,” he said. “So there are huge numbers of questions that need to be settled.”

Along with talks on citizens’ rights and the financial settlement, the Northern issue is one of the three on which “substantial progress” must be made before the second phase talks are allowed to begin. In Brussels, however, there is little confidence that at the current pace the talks will achieve “sufficient progress” by October’s EU summit. The heads of government will set the yardstick.

Responding to Mr Juncker, a spokesman for British prime minister Theresa May said “we will see where we get to on Thursday but we belive we are in a good position and we would like to move on to discuss our future relationship”. British sources were upbeat, describing the talks on Tuesday as “productive and cordial”.

The 150-strong negotiating teams will meet in three working groups for some 55 hours of talks this week, with the next round scheduled for a month’s time, although the UK says it is keen to accelerate the process.

At the discussions on the “financial settlement” the UK is understood to have presented a detailed legal analysis of the Commission paper on its financial liabilities. London, while acknowledging that it does have liabilities, has yet to present its alternative proposals, some suggest because of the politically toxic effect they could have on the forthcoming Conservative Party conference.

Agreeing on a methodology for calculating the Brexit bill to the UK, put by some in the commission at as high as €100 billion, is likely to be the most fraught in the three preliminary strands of discussions, but so far it is the least discussed.

The Northern Ireland working group’s discussions open on Wednesday morning with an expected detailed series of questions from the commission team to the proposals set out by the UK last week. Irish officials say that while that paper ticked a lot of boxes, they and the commission were left with little sense, for example, of how worthy aspirations to continuing North-South co-operation arising from Belfast Agreement obligations would be maintained in practice.

The Barnier team will publish its own paper on Northern Ireland within the next couple of weeks.