Higgins calls for solidarity in face of ‘cowardly’ attacks 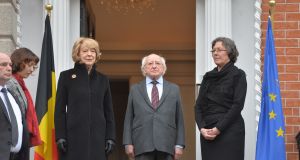 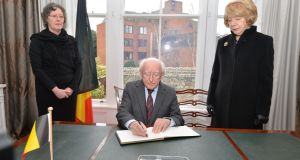 President Higgins with his wife Sabina (right) at the Belgian Embassy in Dublin with Agnes Scheers, deputy head of the Belgian Mission. The president stood for a minute silence and signed a book of condolence for those killed in the bomb attacks on Brussels airport and metro station. Photograph: Alan Betson/The Irish Times 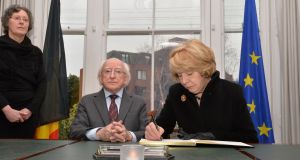 President Higgins with his wife Sabina (right) at the Belgian Embassy in Dublin with Agnes Scheers (left), deputy head of the Belgian Mission. The president stood for a minute silence and signed a book of condolence for those killed in the bomb attacks on Brussels Airport and metro station. Photograph: Alan Betson / The Irish Times 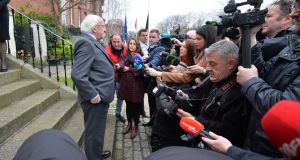 President Michael D. Higgins speaks to reporters after signing a book of condolence for those killed in the bomb attacks on Brussels Airport and metro station. Photograph: Alan Betson / The Irish Times 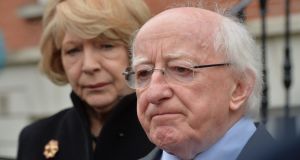 President Michael D. Higgins with his wife Sabina at the Belgian Embassy in Dublin. Photograph: Alan Betson / The Irish Times

President Michael D Higgins has condemned Tuesday’s attacks in Brussels as “cowardly” and called on all Europeans to act in solidarity with one another when responding to terror threats.

Speaking from the steps outside the Belgian Embassy on Elgin Road in Dublin, Mr Higgins sent a message of solidarity to the nearly 15,000 Irish citizens living in Belgium and highlighted the “valued connection” that exists between Ireland and Belgium.

“I certainly offer them all of the solidarity that is necessary and that will be of assistance to them in getting on with the peaceful lives of ordinary people and being able to live out their hopes and joys,” said Mr Higgins.

“These actions are terrible actions, they’re cowardly actions, and the price is being paid by civilians. But it is very important not to allow them to establish the fear which is their purpose.”

The president said people must not lose sight of the “fundamental values” of our peaceful society - “...being able to differ with each other, discuss the futures that we share with each other and not to be dislodged. That is very imporant.”

“At the end of day the great response always to terror acts against civilians is that civilians have shown their resilience. Their values are more important and they’re the values that endure from one generation to another.”

“We re-affirm our commitment of wanting to live together in peace and being able to disagree in peace.”

Mr Higgins was joined by his wife Sabina and the deputy head of mission to the Belgian Embassy Agnes Scheers in holding a minute’s silence for the victims of Tuesday’s attacks in Brussels on the steps of the embassy.

The president was the first person to sign the embassy’s book of condolence which will remain open for the public to sign from 12pm - 3pm on Wednesday and Thursday this week.

Islamic State has claimed responsibility for the explosions that killed more than 30 people and injured up to 230 on Tuesday at Brussels airport and in a metro station in the city.

At least 14 people died when two bombs were detonated in the departure hall of Brussels airport at approximately 8am local time on Tuesday, shattering glass windows and bringing down a cascade of ceiling tiles on the dead and wounded.

About an hour later and 11km west of the airport, a bomb exploded on a packed rush-hour train as it was pulling out of the Maelbeek metro station on the rue de la Loi in the EU district of the city. Some 20 people died in the metro attack and 130 were injured.

The first confirmed fatality was named as 37-year-old Adelma Tapia Ruiz, a mother of two from Peru, by the country’s foreign ministry.

Laachraoui’s DNA has been found in houses used by the Paris attackers last year, prosecutors said on Monday, and he had travelled to Hungary in September with Paris attacks prime suspect Salah Abdeslam.

1 Covid-19: Two-week quarantine period for arrivals into State could be lifted for some
2 The momentum behind calls to ease lockdown may become irresistible for politicians
3 Trump announces clampdown on social media companies
4 Coronavirus: Schools should reopen in early stage of lifting lockdown, HSE experts say
5 Irish planning for no-deal Brexit to restart as EU-UK talks go badly
Real news has value SUBSCRIBE