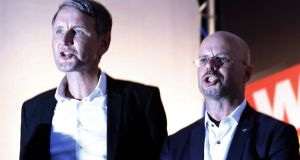 Germany’s domestic intelligence agency has said it is formally placing part of the far-right Alternative for Germany (AfD) party under surveillance after classifying it as extremist.

Thomas Haldenwang, head of Germany’s BfV intelligence agency, said a radical faction within the AfD known as The Wing is considered a proven extremist organisation.

The Wing is led by Bjoern Hoecke and Andreas Kalbitz, the AfD’s regional chiefs in the eastern states of Thuringia and Brandenburg.

Mr Hoecke is well known for his far-right positions, and notoriously called Berlin’s memorial to the victims of the Nazi Holocaust a “monument of shame”.

“This is a warning to all enemies of democracy,” he said. “We stand together and act.”

The party immediately criticised the move.

Putting The Wing under surveillance increases pressure on the party and could strengthen calls for it to be banned.

Civil servants who are members of The Wing could face scrutiny and even disciplinary measures. – AP