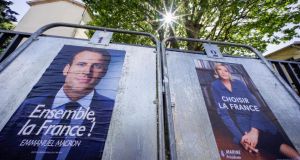 Polls predict Emmanuel Macron will win the May 7th run-off with about 60 per cent, but recent momentum has been with Marine Le Pen, who clawed back about five percentage points in the past week. Photograph: Robert Pratta/Reuters

A week before a decisive second round in France’s presidential election, many voters are sceptical that either of the two candidates can solve chronic unemployment or tackle security concerns, a poll published on Sunday found.

Polls predict Mr Macron, a former economy minister, will win the May 7th run-off with about 59-60 per cent. But the momentum has recently been with Ms Le Pen, who has clawed back about five percentage points over the past week.

According to the Ifop poll, 45 per cent of voters believe the two finalists would not put an end to unemployment, which has for years stood close to 10 per cent in France. And 36 per cent say neither candidate is able to protect France from attacks.

France has been under a state of emergency since 2015 and has suffered a spate of Islamist militant attacks mostly perpetrated by young men who grew up in France and Belgium. More than 230 people have been killed in the past two years.

Days before the first round on April 23rd, a French policeman was shot dead and two others were wounded in central Paris in an attack claimed by the Islamic State group.

The outcome of the run-off will depend to a large extent on floating voters and potentially high levels of abstention.

In the first round, 22.2 per cent of voters abstained, the highest percentage since 2002 when Marine Le Pen’s father, Jean-Marie, surged into the second round only to be defeated overwhelmingly by conservative Jacques Chirac.

If turnout is low in the second round, analysts say Mr Macron may struggle to reproduce the same broad movement against the National Front candidate, citing his mainly free-market policies at a time when anti-establishment feeling has been on the rise in Europe and the United States.

Left-wing candidate Jean-Luc Mélenchon, with 19.6 per cent of votes in the first round, has urged his supporters to oppose Ms Le Pen but has refused to back Mr Macron for the second round.

Ms Le Pen travelled to Marseille on Sunday to speak on the environment, a key issue for Mélenchon supporters, while Mr Macron was expected to visit the Holocaust memorial in Paris later.

The Ifop poll found 42 per cent of voters believe Mr Macron and Ms Le Pen would be unable to reunite the country after months of bitter campaigning, while 43 per cent questioned whether they would be able to govern even after capturing the Elysee palace.

France returns to the polls in June to select members of the National Assembly, the lower house of parliament, where a majority is needed to push through government policies.

Both Mr Macron, who launched a new party a year ago, and Ms Le Pen, whose National Front has only two seats in the National Assembly, have faced questions about their ability to build a parliamentary majority.

Ms Le Pen said on Saturday defeated right-wing candidate Nicolas Dupont-Aignan would be her prime minister if she won.

Mr Macron received support on Sunday from Jean-Louis Borloo, a previous leader of the UDI, a small centrist party, but has yet to say who he would ask to lead a government. – (Reuters)