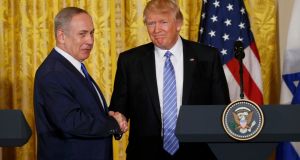 As preparations are being finalised for a visit by US president Donald Trump to Jerusalem this month, a US congressman said Mr Trump intended to use the occasion, the 50th anniversary of Israel’s capture of east Jerusalem during the 1967 Six Day War, to announce the relocation of the US embassy from Tel Aviv to Jerusalem.

Mr Trump pledged to move the embassy during the election campaign but since becoming president and meeting with a number of Arab leaders said merely he would like to see the move take place eventually.

Asked on Thursday if he would announce the move while in Jerusalem, Mr Trump responded: “Ask me in a month on that.”

Ron DeSantis, a Republican member of the US House of Representatives , who earlier this year held a fact-finding trip to assess possible locations for the embassy, said Mr Trump would announce the relocation during his visit.

“What better time could there be to announce the relocation of the US embassy to Jerusalem than when you are over here celebrating with our Israeli friends this very important 50th anniversary of the liberation of Jerusalem?” Mr DeSantis said.

Despite the comments, officials in Jerusalem downplayed prospects of a dramatic announcement during the visit. Since a law mandating a move of the embassy to Jerusalem was passed by Congress in the mid-1990s, all US presidents have signed a waiver postponing the law’s implementation every six months, citing national security reasons.

Although such a move would have merely symbolic value, it would likely be interpreted by Palestinian and other Arab leaders as tacit American recognition of Israeli sovereignty over Arab east Jerusalem.

A decision to relocate the embassy could destroy Mr Trump’s standing in the Arab world and leave the plans for a new American peace initiative stillborn.

It is expected Mr Trump will visit the West Bank and meet Palestinian president Mahmoud Abbas during the trip but it is still not clear whether he will add Arab states to his itinerary.

He will be accompanied by his wife Melania, daughter Ivanka, and son-in-law turned adviser Jared Kushner, who is helping shape the administration’s Middle East policy.

Mr Trump, who will meet Mr Abbas this week at the White House, met Israeli prime minister Binyamin Netanyahu in February. He has called on Israel to constrain its settlement activity and endorsed a comprehensive solution to the conflict in any form so long as both sides agree to it.