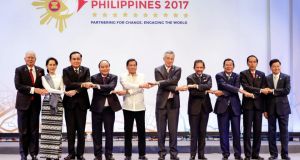 Leaders from 10 southeast Asian countries expressed their “grave concern” about the North Korean missile crisis in a statement from the Association of Southeast Asian Nations (Asean) summit in the Philippines.

However, a communique from the meeting of regional leaders dropped a reference to an international arbitration criticising China’s growing assertiveness in the South China Sea, which marks a victory for Beijing. Although China is not a member of Asean, it casts a long shadow as it has become so economically important in the region.

Heightened tensions in the Korean peninsula have dominated the agenda at meetings in the past few days between leaders, foreign ministers and finance officials from the Asean states, which include Malaysia, Singapore, the Philippines, Brunei, Indonesia, Vietnam, Thailand, Myanmar, Cambodia and Laos.

North Korea tested another ballistic missile on Saturday in defiance of growing economic and diplomatic pressure on the isolated state to dismantle its nuclear programme and cease testing ballistic missiles.

Singapore’s prime minister Lee Hsien Loong said: “Asean needs to be strong and united in calling for the [Democratic People’s Republic of Korea] DPRK to cease all provocative actions and return to the path of dialogue.”

Regional leaders attending the summit are uncertain about how the US under President Donald Trump will represent its interests in the region.

Washington’s apparent growing closeness with China over the North Korean issue may cause to it to soft-pedal on China’s rising regional assertiveness.

A territorial row exists between Asean members Brunei, Malaysia, the Philippines and Vietnam with Beijing over ownership of strategic trade routes in the South China Sea, most of which China claims as its own.

The region has valuable gas and oil reserves as well as prized fishing grounds.

Last week, Asean chairman Rodrigo Duterte, president of the Philippines, said the summit would avoid mentioning a ruling by an international maritime court in The Hague dismissing China’s claims to 95 per cent of the South China Sea.

The statement excluded the phrase “full respect for legal and diplomatic processes”, which China has read as referring to the July 2016 tribunal ruling.

Asean statements are famous for trying to avoid implicating other countries, and countries such as Cambodia and Laos are strong allies of China and reluctant to criticise Beijing.

The challenge to China’s claims was originally brought by Mr Duterte’s predecessor, Benigno Aquino III, leading to friction with China, but Mr Duterte has adopted a more conciliatory tone with China, which called the Hague ruling a “farce” and ignored it.

The Singaporean leader said Asean member nations and China were making progress towards finalising a framework on a code of conduct in the disputed waters by June of this year, the Straits Times reported. – (Additional reporting: Reuters)