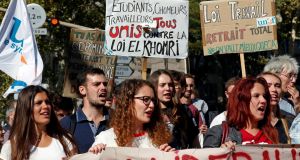 It was the first such semblance of unity in a decade, but the appearance was deceptive. At a prestrike meeting late on Monday the communist CGT failed to persuade other unions to “federate discontent” in yet another day of protest on October 19th.

From the unions’ point of view Tuesday’s turnout was disappointing. The main teachers’ union had predicted that close to half of teachers would strike, but the education ministry said only 17.45 per cent did not show up for work. The unions had hoped to rally up to 500,000 protesters across the country. The CGT claimed 400,000 people marched, but that figure was not judged credible. In Paris, police said 26,000 people demonstrated. The CGT said the protesters numbered 45,000.

The moribund Socialist Party, which stayed away from a half-dozen protest marches last month, supported Tuesday’s demonstrations. The Socialists are traditionally close to the civil service, and are trying to staunch the flow of supporters to Jean-Luc Mélenchon’s far-left France Unbowed. The Socialists accuse Mr Macron of undoing his predecessor François Hollande’s measures in favour of the civil service.

Communists, Greens and France Unbowed also participated in the protests. The government shows no sign of altering its plans for reforms, but it is keen to ensure that opponents remain divided and do not reach a critical mass.

Le Figaro newspaper suggested that the unions are struggling to recover from the failure of last month’s protests. Mr Macron signed decrees enacting his reform of the labour code at the end of September. Only the hardline CGT holds out hope of reversing them. “The decrees are behind us,” Bernard Sagez, the head of the CFTC union, told Le Monde. The reform of the labour code affects only the private sector.

Four of the civil servants’ five main grievances are against policies adopted during Nicolas Sarkozy’s 2007-12 term and resumed by Mr Macron: substantial reductions in the number of civil servants; the “day of non-payment”, which docks salaries for the first day of sick leave; the idea of basing pay on merit, not automatic increments; and a freeze on the index that is one of three elements used to determine civil servants’ salaries.

Mr Sarkozy cut the number of civil servants by 150,000 by failing to replace one in two on retirement. Mr Macron has promised to reduce the number by 120,000, through attrition, during his five-year term. Only 1,600 civil servants’ jobs will be cut in 2018.

The “day of non-payment” will be re-established on January 1st, saving the government €200 million a year. When the policy was enacted under Sarkozy absenteeism fell by 15 per cent, according to Le Figaro.

Civil servants are also angry about the 1.7 per cent increase in the general social contribution, or CSG tax, which they say contradicts Mr Macron’s promise to increase their purchasing power. Prime Minister Édouard Philippe promised on Monday that the tax increase would be “totally neutralised”, but the government has not made clear how this will be done.

Laurent Berger, the head of the CFDT union, expressed a widespread feeling among civil servants that they do not receive the respect they deserve. “They suffer from being seen as a drag on the budget and not as a resource,” he told the economic daily Les Echos.

1 Aaron Brady, the man who said with pride he was a cop killer
2 Coronavirus: 40 new cases and one more death confirmed by Nphet
3 Aaron Brady found guilty of capital murder of Det Garda Adrian Donohoe
4 A chronicle of dignity and despair
5 Ireland among countries urged to consider reinstating Covid-19 restrictions
Real news has value SUBSCRIBE