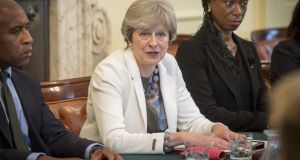 British prime minister Theresa May hosts a discussion around the cabinet table on Tuesday on the findings of the Race Disparity Audit, which she commissioned last year. Photograph: Bradley Page/Getty Images

Ethnic minorities in the UK face huge disparities in life experiences and outcomes compared to their white counterparts, according to government statistics published on Tuesday.

The ethnicity facts and figures website, a government audit of public services, showed the influence of ethnicity on a range of areas covering health, education, employment and the criminal justice system among 130 topics.

Black people were more than three times as likely to be arrested as their white peers.

Less than two-thirds of people from ethnic minorities are in work, compared with three-quarters of white people. While working age people with an Indian background are nearly as likely to have a job as white people, those of Pakistani and Bangladeshi origin are the least likely to be in employment.

People from Indian backgrounds and white British people are more likely to own their own home than other ethnic groups.

More than two-thirds of people from these groups are homeowners, compared with fewer than half of people from Black Caribbean, Bangladeshi and mixed backgrounds .

Among poorer children, who are eligible for free school meals, those from minority backgrounds have higher attainment levels for reading, writing and maths than white pupils.

By age 11, about half of those of Bangladeshi and Indian origin reached expected academic standards, compared with fewer than a third of white British children, who fared the worst of any group.

There were surprising differences between ethnicities when it came to taking up smoking: white 15-year-olds are much more likely to smoke than their BME counterparts, with black teenagers least likely to smoke at this age.

Theresa May, who commissioned the audit soon after becoming British prime minister last year, has faced criticism that it describes the problems faced by Britain’s ethnic minorities but does not outline proposals to solve them.

However, taking calls on the issue on an LBC radio phone-in on Tuesday, she said: “This is not just about publishing a set of data and saying ‘That’s it, job done’. Absolutely not. This is the starting point of what we have to do.”

Ms May said she was “not sure at this stage” what legislation might be needed, but said there was already work under way to tackle the disproportionate number of black boys excluded from school. And she said that in some cases, progress might be made simply by highlighting the issue with employers and public bodies.