France to deploy 10,000 troops to boost security after attacks 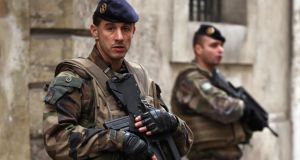 Soldiers stand guard outside a Jewish school as the French interior minister Bernard Cazeneuve meets police officers after a visit to the school in the Jewish quarter of the Marais district in Paris on Monday . Photograph: Getty

Around 15,000 security personnel are being deployed across France to guard schools, train stations and cultural sites after last week’s Paris shootings which left 17 dead.

French president Francois Hollande ordered the deployment of troops at a crisis meeting with ministers on Monday.

French defence minister Jean-Yves Le Drian said 10,000 soldiers would be in place on the streets from Tuesday evening to assist police in guarding sensitive areas.

He said an additional 4,700 police officers had been deployed to 717 Jewish schools and religious sites.

The minister said the deployment, the first of its kind, was needed because “threats remain”. It is the first time troops have been deployed within France on such a scale.

The attacks at magazine Charlie Hebdo, on a police officer, and at a kosher supermarket left 17 civilians and three gunmen dead.

Earlier French interior minister Bernard Cazaneuve said on Monday around 5,000 members of the security forces would guard and other sensitive sites Jewish schools ahead of the arrival of troops over the next two days.

“We’re making war against terrorism, against jihadism and against radical Islamism,” Mr Valls said in an interview on RMC Radio. “One of the individuals probably had an accomplice.”

French security services began the search for possible accomplices in part because of the release of a seven minute video in which one of the gunmen declared allegiance to the Islamic State.

The video had a banner detailing the killing of four people at a kosher grocery where the gunman was shot dead by the police, showing it was edited and posted after his death.

It shows Amedy Coulibaly, the man who fatally shot a police officer in the Paris suburb of Montrouge on January 8th and then killed four hostages at the grocery store the following day. It was posted on Sunday morning, two days after Coulibaly was killed by police.

The Kouachi brothers, Said and Cherif, who are believed to have killed 12 people in an attack on the magazine Charlie Hebdo, were shot dead by police at almost the same time as Coulibaly on Friday.

French police are looking for people who may have funded, supported or sheltered Coulibaly and the Kouachis.

The video and media reports of a stash of weapons, IS flags and cash found in an apartment near Paris rented by Coulibaly on January 4th, have raised concerns about a wider network of terrorists.

“The brothers of our team did Charlie Hebdo, I went after the police,” Coulibaly says in the video to the sound in the background of a television report on the attacks. We did things a little bit together and a little bit separately to have more impact.”

Police are also looking for a fourth suspect who fled France days before the Charlie Hebdo attack, police said.

Hayat Boumeddiene, believed to be Coulibaly’s wife, was reported to have been in Syria when the attacks took place.

European Union interior ministers, meeting yesterday in Paris, agreed to increase intelligence sharing on individuals and to tighten the EU’s external borders to stem the flow of terrorists between Europe and Syria.

More than 1.5 million people marched in the French capital on Sunday in a show of unity.

The French government said the rally turnout was the highest on record. Across France, nearly four million people joined marches, according to an interior ministry estimate.

About 40 world leaders joined the start of the Paris march, linking arms in an act of solidarity.