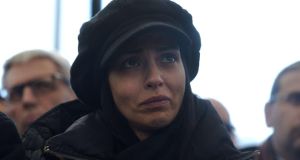 The daughter of Phillipe Braham, one of four Jews killed in an Islamist attack on a Kosher supermarket in Paris last week mourns during their funeral service in Jerusalem yesterday. Photograph: Jim Hollander/AFP/Getty Images 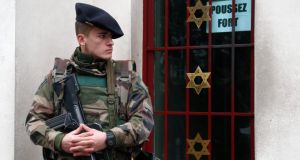 A French soldier secures the access to a Jewish institution in Neuilly-sur-Seine in western Paris yesterday, as part of the highest level of the “Vigipirate” security plan after last week’s terrorist attacks. Photograph: Charles Platiau/Reuters 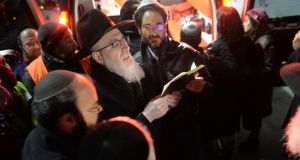 The coffins of the four Jewish terror victims killed during a siege at a kosher supermarket in Paris last week arrive at Ben Gurion airport in Tel Aviv yesterday. Photograph: Kobi Gideon/GPO via Getty Images

Benjamin Blum enters the security code at the entrance to the synagogue on rue Pavée, allowing nine soldiers with automatic weapons to make their way inside. Passersby stop on the narrow street, in the heart of the Marais, watching the troops in their combat colours and bulletproof vests mingling with a clutch of men wearing beards and black hats.

Similar scenes played out across France, where thousands of extra soldiers and police have been deployed to 717 Jewish schools and religious sites since the siege that resulted in the deaths of four hostages at a kosher deli in the east of Paris last Friday.

The killings have shaken members of France’s 500,000-strong Jewish community – the largest in Europe – and stirred debate on their position in the society.

Blum, a 22-year-old Parisian who works at the synagogue, says some members of his family are afraid of a repeat of the deli attack, but not him. “For me, there is nothing new under the sun, as they say. It was always like this, and it will always be like this.”

Anti-Semitism “has always existed”, he says, but the Hyper Cacher supermarket attack nonetheless hit him hard. One of his teachers was a brother of Philippe Braham, a 45-year-old father of three who was among those killed.

The other victims were Yoav Hattab, a 21-year-old, originally from Tunisia, who had gone to the shop buy a bottle of wine to bring to a friend’s house and was killed when he attempted to grab a Kalashnikov from the attacker; Yohan Cohen (22), who was working at the deli to save money for his marriage; and François-Michel Saada, a 64-year-old retiree with a wife and two children.

All four were buried in Jerusalem yesterday after funerals attended by Israeli prime minister Binyamin Netanyahu and France’s environment minister, Ségolène Royal, who said the victims were being posthumously awarded the Légion d’honneur, France’s highest decoration.

To show solidarity with the community, President François Hollande and other senior figures have rallied to the side of Jewish leaders. Hollande joined Netanyahu for an emotionally charged evening at the Grande Synagogue de Paris on Sunday, while yesterday prime minister Manuel Valls visited the rue Pavée synagogue and the surrounding area to reassure the community that security would be enhanced.

The supermarket killings have revived at a national level a debate that has been taking place within the Jewish community for some time: should we stay or go? Many point to the deli attack as just the latest in a series of anti-Semitic incidents that have made Jews in France feel less and less secure.

Often cited are the desecration of 35 Jewish graves in the southern town of Carpenters in 1990; a 2006 incident in which telephone salesman Ilan Halimi was tortured to death in the Paris suburb of Sarcelles; and the 2012 shooting spree in Toulouse by Islamist Mohamed Merah, who targeted a Jewish school.

Increasing numbers of French Jews have been leaving. Last year, 7,000 emigrated to Israel – double the figure for the previous year. That made France, for the first time, the number one source of immigration to Israel, according to the Jewish Agency, a nonprofit group that helps Jews move to Israel.

Officials in Israel say they are expecting – and encouraging – more to follow. During his visit to Paris this week, Netanyahu urged French Jews to come “home” to Israel, assuring them the Jewish state would welcome them “with open arms”. That drew applause from those gathered at the synagogue, but not everybody agrees.

“France without the Jews is not France anymore,” said Valls in what was taken as a response to Netanyahu’s call. Haim Korsia, the chief rabbi here, has stressed Jews are an integral part of the republic. “We dream in French, we think in French, our culture is French, our language is French,” he said. “Obviously France is our country.”

In an interview with Libération, the rabbi of the suburb of Ris-Orangis, Michel Serfaty, said the “great majority” of French Jews saw their future in France. Gad Idgui, secretary general of the Future of Judaism group, said he was uncomfortable with Netanyahu, the head of “a foreign” state, addressing a Parisian synagogue during an Israeli election campaign.

Yet the anxiety is real. Isaac Marciano, a 24-year-old student, says he is afraid not for himself but for his little brother, who attends a Jewish school. “What if someone pulls up at a school and opens fire as the children are leaving,” he asks, standing outside a shop on rue des Rosiers, famous for its Jewish bakeries and shops.

Marciano hopes to move to Israel next year, but not because of the attacks; he has always dreamed of going. “I was born in France. My culture is French. I eat French, I sleep French. That’s the French side of me. But I’m Jewish as well. I belong to both France and Israel.”

Most important, says Joël Mergui, president of the Israelite Central Consistory of France, is that French Jews must choose with their heart, “They love France,” he says. “And if they leave it, it must not be because they’re afraid or because they gave up on France’s values.”