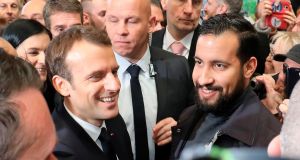 Eight months after he was filmed beating up demonstrators while disguised as a policeman, Emmanuel Macron’s former bodyguard Alexandre Benalla has again become a source of embarrassment to the French president.

As revealed by the investigative website Mediapart and Le Monde newspaper this week, Benalla did not return two diplomatic passports that were issued to him when he worked for Macron. He has in recent months used the passports to travel to Israel and Africa.

A diplomatic passport enables one to pass through customs and immigration unhindered.

Benalla (27) lives with his wife and baby in London, where he has reinvented himself as a “consultant” in international arms deals.

The Franco-Israeli businessman Philippe Hababou Solomon told Le Monde he met Benalla through a mutual friend after last summer’s scandal and hired him as an “apprentice” in connection with “private Franco-Turkish co-operation in Africa”. Solomon said Benalla “is brilliant ... He can help me a lot because he knows the inner workings of a state.”

In London, Benalla has met three times with the Franco-Algerian businessman Alexandre Djouhri, who is awaiting extradition to France in connection with alleged funding by the late Libyan dictator Muammar Gadafy of former president Nicolas Sarkozy’s 2007 presidential campaign.

When Le Monde asked Benalla about his connection with Djouhri, he replied, “There’s a certain racism in our country. Whether it’s him or me, we’re always made to remember our [Arab] origins. It’s a way of telling us to stay in our place.”

In early December Benalla travelled in a private plane from Yaoundé, Cameroon, to N’Djamena, the capital of Chad, where he met with President Idriss Déby and his brother Oumar, who is responsible for military procurement. From there, Benalla travelled to Istanbul, where Solomon paid his bill at the Hilton hotel.

In October, Benalla and Solomon travelled together to the oil-rich, central African country Republic of the Congo. They stayed in the compound of President Denis Sassou-Nguesso. Benalla has also met with the cabinet director of the president of Cameroon, Paul Biya.

Déby, Sassou-Nguesso and Biya are all ageing dictators allied with France. According to Le Monde, they complained to Benalla about the “coldness” of Macron’s advisers on Africa.

In Cameroon and Chad, Benalla and Solomon accompanied a Turkish business delegation representing a Sudanese textile company and a joint venture between Qatar and Turkey. The purpose of the visits was to sell army uniforms and to discuss investment in Qatar.

The resurgence of the Benalla scandal occurs at an unfortunate time for Macron, when his approval rating is at a record low and the most hardline gilets jaunes protesters continue their campaign against him.

On December 21st, the yellow vests decapitated and burned a mannequin representing Macron in Angoulême. Three organisers of the “execution” were summoned to police headquarters on Friday. On Thursday night several dozen yellow vests attempted unsuccessfully to storm the president’s summer residence at Brégançon, on the Côte d’Azur.

Now the president is under pressure again, to explain why the Élysée did not ensure Benalla returned two diplomatic passports that were issued to him by the foreign ministry at the request of the Élysée. In particular, Macron’s critics want to know why the second passport was issued on May 24th, 2018, three weeks after Benalla was suspended for his violent behaviour on May 1st.

In testimony before a Senate investigative committee last September 19th, Benalla claimed he had left the passports in his office at the Élysée when he was fired in July.

The foreign ministry confirmed that it twice wrote to Benalla to demand the return of the passports. The first letter was not delivered, because Benalla had moved house. The second registered letter was collected by someone holding Benalla’s power of attorney on August 6th.

Foreign ministry spokeswoman Agnès von der Muhll said, “Any use of these passports was done in violation of commitments made by the holder” and that the ministry was considering “judiciary pursuit”. Benalla could be prosecuted for usurping the role of a diplomat.

Macron’s cabinet director, Patrick Strzoda, wrote to Benalla on December 22nd, demanding “all pertinent information” about his work as a consultant. The Élysée wants to know if Benalla used his proximity to Macron to pursue private business before the scandal broke in July.

In a letter copied to the Paris prosecutor, Strzoda asked Benalla to respect “the obligation of secrecy and ethical duties connected with your past functions”. The Élysée “forbade” Benalla from giving the impression he enjoyed “any recommendation or tacit support from the presidency”.