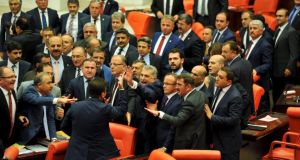 Turkey's Republican People’s Party deputies argue with ruling AK Party lawmakers on deploying troops in the face of threats from within Syria and Iraq. Photograph: Reuters

Tucked away down the back alleys of Istanbul’s Grand Bazaar, the shrill of men calling out numbers and figures rings loud. Each one has at least one phone to an ear.

They are currency traders, and for a month the Turkish lira has been in freefall: some €27 billion has flowed out of the country in the past year, and last month the lira lost 9 per cent of its value against the US dollar, forcing the government to publicly assuage growing unease over the economy.

“Today was a bit better for the lira,” said an agent unenthusiastically while wearily wiping his brow.

Prime minister Ahmet Davutoglu’s failure to beat the recent deadline to form a coalition government, following inconclusive parliamentary elections in June, is a major concern for Turks. A new election is slated for November 1st.

No one, not least the electorate, wants to face another campaign of mud-slinging and incitement. But such is the polarised state of Turkish politics that few believe another vote will conclusively bring stability.

In the meantime, a provisional government involving Davutoglu’s AK Party and several others must be cobbled together at a time when 60 security forces have been killed in skirmishes with members of the Kurdistan Workers’ Party (PKK). Bombing raids on PKK militants have continued in the southeast of the country.

November’s election is likely to be held against the backdrop of ongoing violence that indirectly concerns the Kurdish- aligned Peoples’ Democratic Party (HDP), which passed the parliamentary threshold in June for the first time and is now an important political player and foe of the caretaker AK Party government.

The AK Party’s anger with the HDP is in part fuelled by the latter’s meteoric rise and entry to parliament, which cost the AK Party a majority it had enjoyed for more than a decade. The HDP has also been accused of links to the PKK, a terrorist organisation in the eyes of Turkey, the EU and US.

The party denies this claim and has repeatedly called on the PKK to stop its attacks.

“The AK Party’s calculation to recoup the votes it lost last June will misfire, given the steep rise in terrorist attacks and the bad state of the economy,” he said. “President [Recep Tayyip] Erdogan is overplaying his hand and losing ground with his negative political discourse.

“And, in the day after, if the opposition can come together, Turkey will see better days. All must have learnt valuable lessons since the June 7th elections.”

The right-wing Nationalist Movement Party, Turkey’s third largest, opposes any dealings with the PKK and, by extension, the HDP. The return of PKK terrorism receives top billing in media outlets sympathetic or closely tied to the government.

The killing of 32 activists in the border town of Suruc on July 20th again raised the spectre of past conflicts and violence that led to some 40,000 deaths and a series of military coups during the 1980s and 1990s.

For many Turks who lived through these military dictatorships, the years of AK Party rule have been prosperous and peaceful.

AK Party officials failed to respond to repeated attempts for comment, though a leading figure and deputy prime minister this week laid the blame for the upsurge in violence at the door of the HDP.

“It is obvious that we will at least be maintaining our present number,” he said. “W could be heading for 100 parliamentary seats. This [the conflict] has not been seen by Kurdish people as a war but as self-defence.”

No official records based on ethnic affiliation are kept in Turkey, but about 15 million of Turkey’s 77 million population are thought to be Kurdish, making Kurds a potentially vital voting bloc. In June’s election, conservative-leaning Kurds are presumed to have handed thousands of votes to the HDP – in part, observers say, because of the government’s verbal tirades in the lead-up.

However, analysts warn against the dangers of identity-led campaigning.

“If the HDP becomes the only party for the Kurds, which have around 17 to 18 percent of the voters, this will be extremely wrong for the future of the Turkish republic,” pollster Ozer Sencar told CNN Türk.

Other believe the government is unlikely to reverse its jingoistic course.

“AK Party’s most dangerous venture could be to increase Turkish military operations in Iraq and in Syria between now and November 1st,” said the CHP’s Logoglu. “This way, fighting also the PKK, the AK Party estimates it will win the hearts of the people.

“None of this will work.”