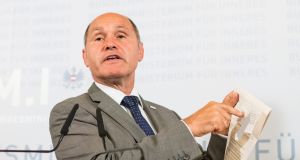 Austria’s interior minister Wolfgang Sobotka announces the postponement of the re-run of the Austrian presidential election, in Vienna on Monday. Photograph: Christian Bruna/EPA

It’s the latest embarrassment for the Alpine republic after the country’s highest court ordered another running of the second round poll following irregularities during a tight run-off in May.

Hoping that the third time is a charm, interior minister Wolfgang Sobotka named December 4th as the new date for the second-round run-off.

“We are going to request that parliament approves a postponement of the election,” Mr Sobotka told reporters at a press conference. He said the delay would cost about €2 million.

Austria has been without a head of state since outgoing president Heinz Fischer stood down in July.

The prospect of a postponement of the October re-run emerged after complaints last week from postal voters that the envelopes holding their ballot papers refused to stay closed.

Austrian authorities admit the re-run decision takes them into a legal no man’s land, particularly over whether to update the electoral register to take into account new and deceased voters – but they say they are determined to hold a legally watertight poll.

In the closely-watched May poll, preliminary results suggested Norbert Hofer, candidate for the far right Freedom Party (FPÖ) finished ahead. But, after postal votes were counted, he lost by almost 31,000 votes to Alexander Van der Bellen, backed by the Green Party.

After the FPÖ challenged the result, the constitutional court said there were enough problematic votes to potentially reverse the result and ordered a re-run.

The greatest problems surrounded the 700,000 postal votes which officials in some districts admitted had either been counted too early or by non-authorised officials.

In its re-run ruling, the court said it had no constitutional issue with the postal vote itself and pointed out that no one had noticed any attempts to manipulate the vote.

The election chaos has been a gift to the FPÖ, which launched a legal challenge that ended in the re-run verdict.

FPÖ officials said on Monday they would agree to the new date only if the postal vote – in which it usually polls worse – was limited to non-resident Austrian citizens.

Though the presidency is largely ceremonial, a win for the FPÖ would make Austria the first European country to elect a far-right head of state since 1945 – a political shot in the arm for extremist allies in France and in northern Europe.