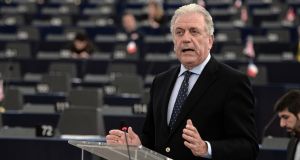 EU Commissioner for Migration Dimitris Avramopoulos: while recognising “poor progress” has been made by “frontline” member states, he said this was “not about the end of Schengen”. Photograph: Frederick Florin/AFP/Getty Images

The European Parliament urged EU member states to strengthen the Schengen free-travel system on Tuesday, as the European Commission increased pressure on Greece to control its external border.

Following the weekly meeting of the college of commissioners in Strasbourg, the European Commission moved to formalise its assessment last week that Greece was in serious breach of its application of Schengen rules and could be suspended from the European free-travel system.

With migration showing no sign of abating, focus falls on Greece’s handling of refugees arriving on its shores. But while recognising “poor progress” has been made by “frontline” member states, migration commissioner Dimitris Avramopoulos said this was “not about the end of Schengen or about cutting out a member state”.

On Tuesday nine people, including two babies, were drowned off the coast of western Turkey as they made their way to Greece. More than 360 people have died in the Mediterranean in the first month of the year, the International Organisation for Migration said on Tuesday, including 60 children.

Tuesday’s plenary session in the European Parliament was dominated by the refugee crisis, which has seen more than a million people reach the EU last year in search of asylum. Opening the debate, foreign minister Bert Koenders, of the Netherlands, which holds the EU’s rotating presidency, said the migration pressure “has not decreased”.

“Time to address this crisis is running out,” he said.

During a wide-ranging and emotional debate, the head of the centre-left Socialists and Democrats (S&D) group said a “violence of fear” was infecting Europe: “We have to say with great concern evil winds are blowing through Europe. We have neo-Nazis in Sweden and Germany. We have terrible comments from politicians talking about shooting refugees, even shooting children.

A suggestion from the leader of the German right-wing Alternative for Deutschland (AfD) party earlier this week that police should be permitted to use firearms against refugees provoked outrage across the EU.

Guy Verhofstadt, the head of the liberal group ALDE, criticised the European Conservatives and Reformists (ECR) group for not distancing itself from the comments of the party’s chairwoman, Frauke Petry, a member of the ECR group. He also urged the EU to invoke Article 78.3 of the EU Treaty to send 2,000 national and European personnel to register and screen refugees in Greece.