Refugee crisis has chilling parallels with the Famine years 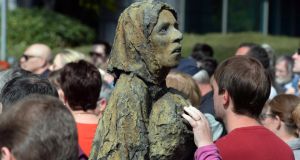 People gathered at the Famine Memorial on Custom House Quay in solidarity with the refugees and migrants around Europe. Photograph: Cyril Byrne/The Irish Times 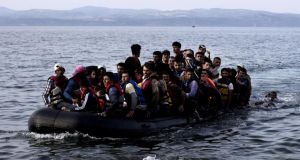 Refugees and migrants arriving on the shores of the Greek island of Lesbos after crossing the Aegean Sea from Turkey on an inflatable boat. Photograph: Angelos Tzortzinis/AFP/Getty Images

Jean-Claude Juncker is right: “there is a reason the number of O’Neills and Murphys living in the US exceeds the number in Ireland”, and you could list hundreds of other Irish surnames which are more numerous in the United States than Ireland itself.

And it is because of a history of emigration and exile that Ireland should be one of the most vocal advocates for a compassionate European-wide resettlement policy for refugees from Syria and elsewhere.

Our crisis in the 1840s was in the first instance an ecological one, as potato blight destroyed the crop, putting between 3 and 4 million poor people at risk of starvation. But it was also a political crisis, compounded by an indifferent and uncaring response of the government in London.

The result: out of a population of just over 8 million people, at least 1 million died and another 2 million people fled the country within a decade.

Many aspects of today’s crisis have chilling parallels with the Famine years. From 1846, huge population movements took place, with people coming into the cities and towns from the countryside to get help, and others walking very long distances to ports to board creaking ships for Britain and North America. Contemporaries were astounded at the sheer number of people put in motion by blight and the failure of government to respond effectively to the calamity.

Panic had set in by winter 1846/47. People risked winter voyages across the Atlantic on unsanitary, unsafe “coffin ships”. Of the nearly 100,000 who left for Canada in 1847, at least 30,000 were dead by the end of that year, perishing at sea or shortly after arrival.

To make port was not to reach end of a journey. People were placed in quarantine stations, or held onboard ships docked at ports. Thousands died at Grosse Île in the Gulf of St Lawrence in Quebec. Many more died at other quarantine stations, the historical equivalent of what are now called refugee detention or holding centres.

And yet the horrors of the Famine prompted a great wave of humanitarian concern which crossed the globe, from the Quaker-led relief organisations in the United States, to relief funds collected in the outposts of the British Empire in Asia and Australia, and of course the global networks of the Irish churches, both Catholic and Protestant.

Amid the horrors of the Irish Famine, many people around the world responded with compassion and humanity. It is from that same humanitarian concern for today’s refugees that Ireland is uniquely well positioned to act as a voice for those who have to leave their country due to war, violence and sectarian hatred.

Enda Delaney is Professor of Modern History at the University of Edinburgh and author of The Great Irish Famine: A History in Four Lives (Gill & Macmillan, 2014)