Why do we feel entitled to travel the world while Ireland closes its borders to others? 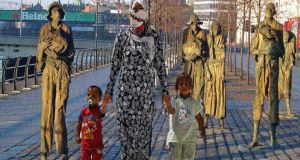 Image of three asylum seekers imposed on a photograph of the famine memorial on Custom House Quay in Dublin.

The images that link today’s refugees with the desperate Irish emigrants of the 1840s are powerful, but we don’t need to go back hundreds of years to find parallels.

The hand of a drowning Irish refugee reaching towards America in the 1840s, set next to the hand of a modern-day Syrian, stretching towards Europe as its owner disappears below water. A Middle Eastern mother, with her children, superimposed among the emaciated figures of the famine memorial on Custom House Quay.

No doubt you’ve seen these images, and others like them. They’re timely and powerful reminders of the hypocrisy of the Irish people who, not all that long ago, sought international refuge as they fled famine and oppression, now turning their backs on the world’s most desperate people.

But we don’t need to look back 150 years to find the roots of this hypocrisy. Instead, consider the tens of thousands of Irish people who have left home since the 2008 crisis. We are migrants, though we might not want to label ourselves that way, since “migrant” has become the dirtiest word in European politics.

So what separates us from those sleeping in train stations in Hungary, suffocating in trucks in Austria and drowning in the Mediterranean?

Firstly, we unquestionably are economic migrants. While countless people have suffered extreme hardship in the last seven years - with the help of our austerity government - none of us is fleeing death in war, by starvation, or through political persecution. No Irish parent is desperate enough to put his or her child on a rickety, overcrowded boat bound for Holyhead. That separates us from the vast majority of those seeking admittance at Europe’s borders.

This fact makes the second difference all the more strange. Because even though we’re economic migrants who, according to Europe’s leaders are less deserving of compassion, we and our families have access to a bottomless well of sympathy.

“It’s terrible,” older Irish people tell me. “Terrible that young Irish people are being driven from home in their thousands when they had no part in causing the crisis.”

Ordinary Syrians and Eritreans had no part in their crises either, but ignorance of their backgrounds blinds us to that.

The third difference is that when we knock on the doors of the world’s wealthiest states, we expect to be welcomed in with warmth and respect, and if we’re not we have powerful friends who’ll take our side. Look at how spiritedly the Irish-American lobby represents illegal Irish immigrants in the US. Remember the outrage when the New York Times cast aspersions on the young people tragically killed in Berkeley, and the thousands of others like them who travel on J1 visas every year. Something as small as the Australian prime minister making a bad Patrick’s Day joke is enough for a groundswell of support for hardworking Irish migrants.

Yet even as we refuse admission to countless refugees, and imprison thousands more in direct provision, we expect asylum seekers to grovellingly thank us for the pittance we give them.

Ultimately, what separates Generation Emigration from our desperate, famine-stricken ancestors, and today’s refugees, is that we have sold our souls for a place in the global elite. We’ve cashed in on our location, our skin colour, our powerful international friends, our history, and our brief period of dizzying wealth, all to ensure that we and our children can move around the world with the unreflective arrogance afforded by a Western passport.

But someday, just as we wonder how our grandparents could shut out the desperate Jews of Europe, our grandchildren will look back on our hypocrisy, and feel ashamed.

Niamh Ní Mhaoileoin is a freelance journalist, currently studying for an MA in Politics in London. @nnimhaoileoin