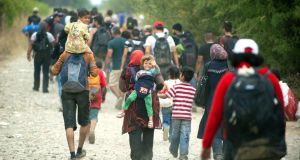 Almost 365,000 migrants and refugees have crossed the Mediterranean into Europe since January, according to the International Organisation for Migration. Photograph: Robert Atanasovski/AFP/Getty Images

Despite the enduring angst about emigration, most of us who’ve left now probably consider ourselves better off. This is a harsh observation but what the hell, I may as well say it. By better off, I mean materially, because it cannot be denied that going leaves a scar and a disconnect that never fully heals.

While we won’t get to have our two bobs worth come election day, and we are destined to live our parallel lives, arguably we have the best of two worlds; the Ireland of our formative years and the bonus of the influence of our adopted country. Perhaps this goes a long way to explain why so many of us are choosing to stay away.

I’ve been in Australia more than 30 years, and lifers like me eventually shed our sense of nostalgia and sentimentality. You have to. Looking back is a futile exercise. That’s not to say we’re prone to the odd relapse, but there’s nothing like living in the present.

The recent tragic refugee deaths in Europe are galling. All of a sudden, underemployed or unemployed Irish are hardly the neediest group by any stretch of the imagination. Or am I missing something?

There’s a huge difference between seeking a better life and fleeing from persecution. For the millions of people in these conflict-ridden places, day-to-day survival is their reality; and their struggle to survive isn’t measurable in economic terms or in monopoly mortgages.

And at least we emigrating Irish don’t have to fork out a small fortune to risk our lives on dodgy boats, nor do we have to run the gauntlet of prolonged mandatory detention, the scenario that awaits “irregular maritime arrivals” here in Australia.

We Irish are more likely to touch down at an airport; and arriving on tarmac trumps leaky boats. In Australia, we have the lamentable situation where the mantra of so many Australian politicians doesn’t go beyond soundbites like “stopping the boats”. Australia is now sending all asylum seekers who come to Australia by sea to Manus Island near Papua New Guinea; and they are deemed ineligible to ever apply to live in Australia.

Asylum seekers arriving on Australia’s shores, often at great personal risk, are touching a raw nerve in the psyche of so many Australians. To put it crudely, they’re not welcome. The irony seldom articulated is that Australia, or at least post-18th century Australia, was founded on the sweat and tears of migrants, successive waves of migrants who helped transform this country into what it is today.

Australia’s hard-line migration policy can sometimes resemble a sort of economic apartheid, whereby people from non-English speaking countries are regarded with suspicion. Primitive offshore processing centres at Manus Island and the Pacific island of Nauru are now well established. It is a not-too subtle tactic deployed to dissuade potential asylum seekers. The shadow cast by September 11th, 2001 has proven to be a very long one indeed. It’s as if, despite Australia’s rich history of multiculturalism, we still prefer to welcome only fair skinned people into our midst.

I’m not trivialising anyone’s decision to emigrate. I did just that, 30 years ago. I know about the wrench and excitement of going. My parents farewelled six of their ten children over a decade. My siblings and I opted to pursue what we imagined would be better lives overseas.

The jury is still out on how some of have fared. We did not have to leave but we chose to do so for various reasons. Had we remained, we wouldn’t have gone hungry but we’d have likely endured long periods of unemployment or underemployment. Ireland at least has a safety net of sorts, a social welfare system that’s non-existent in most of the world’s poorest nations.

By all means, dust off your passports and update your CVs. Give it your best shot and I wish you well. Most likely, after the memories of the grief of goodbyes have abated, you won’t regret your decision. Just remember that, invariably, when you leave, it’s unlikely you’ll ever really return.

Wouldn’t it be great if, the next time LÉ Niamh or LÉ Eithne pluck desperate refugees from the Mediterranean, they were brought safely “home” to Ireland? It would be a much-needed rekindling of that famous a céad míle fáilte for some of those who so desperately need it.