Europe has 10 days to save Schengen area, official warns 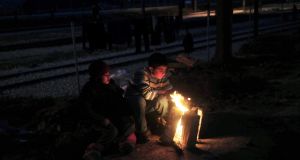 Children sit near a fire as migrants and refugees wait to cross the Greek-Macedonian border near the village of Idomeni, northern Greece. Photograph: Sakis Mitrolidis/AFP/Getty Images

Tensions between EU member states flared yesterday as Greece recalled its ambassador to Austria and a senior EU official warned that Europe had 10 days to save the Schengen free travel area.

Speaking following a meeting of justice ministers in Brussels, migration commissioner Dimitris Avramopoulos said that unless the flow of migrants subsided in the next 10 days, “there is a risk the whole system will completely break down”.

EU leaders are due in Brussels on March 7th for an emergency EU-Turkey summit, the latest attempt by the union to control the refugee crisis which has seen more than 110,000 refugees arrive in the EU so far this year.

The summit, which was called at the behest of German chancellor Angela Merkel, is being widely viewed as an opportunity for the chancellor to demonstrate some progress on tackling the migrant crisis ahead of German regional elections next month.

Austria has become increasingly isolated in recent weeks over its decision to impose a daily cap on asylum applications while permitting thousands of refugees to pass on to Germany each day. Neither Germany nor Greece attended a meeting of western Balkan countries hosted by the Austrian government on Wednesday. The move is believed to have prompted Greece’s decision to withdraw its envoy to Vienna yesterday.

“Responsibility for dealing with the migration and refugee crisis cannot weigh on one country alone,” the Greek foreign ministry said, denouncing what it described as an approach to the refugee crisis “rooted in the 19th century.”

Days after Germany announced a €19.4 billion budget surplus, the country’s deputy finance minister confirmed that the entire surplus was “by law completely reserved for financing the refugee crisis”.

“Money for other things that we might want is simply not there, even if the numbers look different at first sight,” Jens Spahn said.

The country’s finance minister Wolfgang Schäuble said refugee numbers would have to fall as Germany could not handle any more.

Meanwhile, a court in the northern French town of Lille yesterday ruled that the evacuation of migrants from the Calais camp known as The Jungle could go ahead.

Prefect of Calais Fabienne Buccio said about 1,000 people would be given one week from Monday to move “progressively” to the northern part of the camp or to “welcome centres” in France.

Belgian police this week introduced border checks along roads linking France and Belgium amid expectations that refugees in Calais could make their way towards Belgium in a bid to reach Britain.