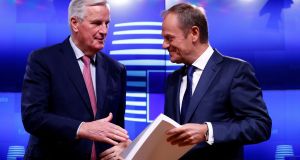 The European Council will hold an extraordinary summit in Brussels on November 25th to finalise and formalise the UK’s withdrawal agreement, council president Donald Tusk has announced.

Early on Thursday, speaking alongside EU chief negotiator Michel Barnier at a press conference in Brussels, Mr Tusk said Brexit was a “lose-lose situation” for the UK and EU and sent a message to the British people: “As much as I am sad to see you leave, I will do everything to make this farewell the least painful possible, for you and for us.”

At the press conference in Brussels, Mr Tusk was presented by the Mr Barnier with a copy of the 585-page agreement approved on Wednesday by Ms May’s Cabinet.

Mr Tusk said that the agreement was already being analysed by all the member states, and by the end of this week the EU27 ambassadors will meet in order to share their assessment.

“I hope that there will not be too many comments,” he said.

Ambassadors and ministers of the EU27 will also discuss the mandate for the European Commission to finalise the joint political declaration on future UK/EU relations published in outline form on Wednesday with the intention of agreeing a final form of the declaration by next Tuesday.

Over the following 48 hours, member states will evaluate the document and sherpas should conclude the work on November 22nd, allowing the European Council to convene at 9.30am on November 25th “if nothing extraordinary happens”.

Mr Barnier said: “This is a very important moment. What we have agreed at negotiators’ level is fair and balanced, takes into account the UK’s positions, organises the withdrawal in an orderly fashion, ensures no hard border on the island of Ireland and lays the ground for an ambitious new partnership.”

Mr Barnier said that his team had “always followed the EU mandate scrupulously” and had achieved “decisive progress” together with the UK negotiators.

He added: “Our work is not finished. We still have a long road ahead of us on both sides.

“On my side, in the next few days we will all work on the text of the political declaration on the future relationship with the member states as well as with the European Parliament.

“This work will be intense. Our goal is to finalise this political declaration with the UK so that the European Council can endorse it.”

Mr Tusk and Mr Barnier took no questions from reporters after their brief statements. Mr Barnier said he would now travel to Strasbourg to discuss the agreement with the European Parliament, adding: “We have no time to lose.”

Meanwhile junior Northern Ireland minister Shailesh Vara, who backed remain in the EU referendum, has quit prime minister Theresa May’s government. He said it “leaves the UK in a halfway house with no time limit on when we will finally be a sovereign nation”.

Mr Vara, the Tory MP for North West Cambridgeshire, was promoted to his Government post in July, having previously been a parliamentary private secretary in the Northern Ireland Office. In a statement posted on Twitter, he said: “We are a proud nation and it is a say day when we are reduced to obeying rules made by other countries who have shown that they do not have our best interests at heart.

“We can and must do better than this. The people of the UK deserve better.”–PA