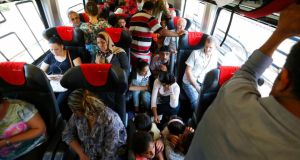 Travellers sit in a train with migrants en route to Vienna from Budapest. Photograph: Laszlo Balogh/Reuters

The European Union’s border and asylum policies were in disarray on Monday night, as member states sought their own solutions to a continuing surge in migrants from the Middle East, Africa and south Asia.

On Monday, Hungary lifted a ban on migrants using international trains, amid outrage over last week’s death of 71 people in a truck driven by suspected people smugglers, only for Austrian border police to stop migrant-filled trains from Budapest to Germany for several hours.

Austrian police said they wanted to check migrants’ papers and send those who had applied for asylum in Hungary back to Budapest. But when the trains finally entered Austria, it seemed the police had abandoned their plan.

The move was part of a major crackdown on people smugglers across Hungary, Austria and Germany, but made of a mockery of the “borderless” and “passport-free” travel promised in the EU’s so-called Schengen zone of 26 states.

Hungary’s unexpected decision to allow people without EU visas to leave on international trains appeared to be a breach of its obligations under the Schengen agreement, and an admission that a controversial razor-wire fence it has unfurled along its border with Serbia has done nothing to slow the arrival of migrants.

“Europe as a whole must move. Member states must share responsibility for asylum-seeking refugees,” German chancellor Angela Merkel said. “If we don’t arrive at a fair distribution then the issue of Schengen will arise – we do not want that.”

As Germany prepares to accept some 800,000 asylum- seekers this year, however, Hungary and other central European states have derided proposals to distribute refugees around the bloc on a quota system – opening a rift in the EU over how to handle a crisis that shows no sign of abating.

“They are extremely harsh. Hungary is part of Europe, which has values, and we do not respect those value by putting up fences,” Mr Fabius said.

“Hungary is not respecting Europe’s common values so the European authorities need to have a serious discussion, even a stern discussion, with its officials.”

Ahead of an emergency meeting of EU justice and interior ministers to discuss migration that is due to take place in a fortnight, Hungary and its central European neighbours look set to forge their own, tough position this week.

“We strongly reject any quotas,” Slovak prime minister Robert Fico said on Monday, as he and Czech premier Bohuslav Sobotka invited their Hungarian and Polish counterparts to meet on Friday in Prague.

“We are prepared to do what is needed and what is within our possibilities, for people who really need help [and] separate them from economic migrants,” he added.

As well as opposing quotas, central European leaders have suggested Muslim refugees could spread Islamic extremism and terror in the region, and expressed a preference for Christian over Muslim refugees, while also insisting that they need to prepare for a possible influx of people fleeing Ukraine’s conflict.

“Some people suppose that the migration wave is a short- term phenomenon and it will stop. In my opinion, it will grow stronger,” Czech president Milos Zeman said.

“Of course I would want the EU to strengthen its borders, but I don’t see any real action . . . Therefore I believe the Czech Republic should take care of its borders alone and expel illegal immigrants . . . including with use of the army.”