European Commission president warns against ‘base reaction’ to Paris attacks 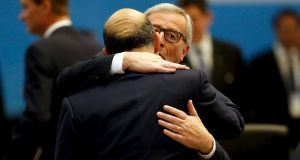 European Commission president Jean-Claude Juncker embraces European Commissioner for Economic and Financial Affairs Pierre Moscovici before a moment of silence for victims of the Paris attacks at the G20 summit in Antalya, Turkey. Photograph: Jonathan Ernst/Reuters

European Commission president Jean-Claude Juncker warned against a “base reaction” to Friday night’s terrorist attacks in Paris, insisting that European Union asylum policy should not be changed.

“We should not mix the different categories of people coming to Europe. The one responsible for the attacks in Paris . . . he is a criminal and not a refugee and not an asylum seeker,” Mr Juncker said on the sidelines of the G20 summit in Turkey.

“I would invite those in Europe who try to change the migration agenda we have adopted - I would like to remind them to be serious about this and not to give in to these base reactions that I do not like . . . I see the difficulty but I don’t see the need to change our general approach.”

Reports that one of the assassins involved in the Paris attacks had a Syrian passport and entered the European Union through Greece in early October have fanned criticism of the EU’s border-free Schengen zone and migration policy.

On Saturday, the new Polish government indicated that it would not participate in the EU’s refugee relocation programme.

“In the face of the tragic acts in Paris, we do not see the political possibilities to implement [the programme],” the incoming European affairs minister Konrad Szymanski said.

“The attacks mean the necessity of an even deeper revision of the European policy towards the migrant crisis. We’ll accept [refugees only] if we have security guarantees.”

Mr Szymanski said that these guarantees were a “key condition”, adding that a question mark has now been put next to the EU’s refugee policy throughout Europe.

His comments have fuelled concerns that a number of east European countries, including Slovakia and the Czech Republic, may oppose an EU relocation plan that was agreed in September following deep divisions between member states on the issue.

Serbian media reported that a suspect in the attacks entered the EU through the Greek island of Leros on October 3rd and continued to Macedonia and Serbia, applying for asylum in Serbia on October 7th.

The suspect then crossed the border into Croatia, the reports said.

European foreign ministers gather in Brussels for a summit scheduled for Monday, with an emergency meeting of EU justice and home affairs ministers convened for Friday.

The attacks in Paris dominated the two-day G20 summit of world leaders, which opened in the Turkish port city of Antalya on Sunday.

Speaking at the opening of the summit, UN secretary-general Ban Ki-moon said that the Paris attacks had given the world a “rare moment” of diplomatic opportunity to end the violence in Syria.

He said that, while the response to terrorism needed to be robust, it also needed to be within the rule of law and with respect for human rights.

With the war in Syria already top of the summit’s agenda before the attacks, world leaders were forced to try and forge a collective response to the threat of Islamic State, despite divisions between Moscow and the West about the role of Syrian president Bashar al-Assad in any future government.

US president Barack Obama and Russian president Vladimir Putin met at the sidelines of the summit, the first time the two leaders have met since Russia commenced aerial bombardment in Syria on September 30th.

While Russia has insisted its interventionin Syria is focused on eliminating Islamic State in the region, Western officials have accused Moscow of targeting opposition forces.

“It was not the moderate Syrian opposition that carried out the attacks in Paris. It was the so-called Islamic State or Daesh.

“I will appeal to every one of the G20 leaders to concentrate their actions on Daesh.

“They are the real enemy of the free world, not the moderate Syrian opposition,” he said, adding that cooperation between Washington and Moscow was “crucial”.

Both France and the US indicated on Sunday that they intend to intensify their efforts against Islamic State in the Middle East.

“We’re confident that in the coming days and weeks, working with the French, we will be able intensify our strikes against ISIL in both Syria and Iraq to make clear there is no safe haven for these terrorists,” US deputy national security adviser Ben Rhodes said in an interview with NBC.

“We stand strong and united in the fight against terrorism,” he said, adding that “terrorism will never defeat democracy”.

The European Commission said on Saturday that the attack in Paris was “an attack against us all.

“We will face this threat together with all necessary means and ruthless determination,” the EU’s executive arm said.

A minute’s silence is to be observed at noon on Monday at Nato headquarters in Brussels and at EU institutions in Brussels.