EU seeks to access AstraZeneca vaccines produced in US 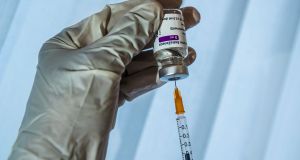 A doctor prepares his syringe with a dose of Oxford Astra-Zeneca Covid-19 vaccine before a first vaccine injection in Paris, France. Photograph: Christophe Petit Tesson

The European Union will urge the United States to permit the export of millions of doses of AstraZeneca’s Covid-19 vaccine to Europe, underlining Brussels’ scramble to bridge supply shortfalls, the Financial Times reported on Saturday.

The EU also wants Washington to ensure the free flow of shipments of crucial vaccine ingredients needed in European production, according to the FT.

“We trust that we can work together with the US to ensure that vaccines produced or bottled in the US for the fulfilment of vaccine producers’ contractual obligations with the EU will be fully honoured, the newspaper quoted the European Commission as saying.

Hungary, which is imposing tough new lockdown measures to curb a spike in COVID-19 infections, reported a record daily high of 7,269 cases on Saturday, a jump of 14 per cent from Friday.

Hungary’s prime minister Viktor Orban’s government on Thursday closed all schools and most shops as the central European country of 10 million grapples with some of the highest infection and death rates in the world.

Mr Orban said on Friday he expected hospitalisations to rise to 15,000-20,000, adding that the country’s health care system should be able to cope without external help; 7,250 people were hospitalised on Saturday, with 750 on ventilators.

His government has tried to avoid a lockdown at all cost to prevent a repeat of the deep recession that followed a spring 2020 clampdown. Hungary’s economy dropped by 5.1 per cent last year after a double-digit fall in the second quarter.

The latest lockdown, which extends a night-time curfew and the closure of secondary schools, will last from March 8th to March 22nd, but schools will stay closed at least until April 7th.

Hungary is rolling out an ambitious vaccination campaign, becoming the first European Union country to use both Chinese and Russian vaccines as well as Western drugs.

It has inoculated at the highest pace in the EU in the past week, according to Our World In Data.

As of Saturday, 950,000 Hungarians had received at least the first dose of a vaccine, and 300,000 people have been fully inoculated, the government said.

Orban said around 2.4 million people could have had at least one shot of a Covid-19 vaccine by early April, rising to about 4.7 million by early May.

The Dalai Lama, the 85-year-old Tibetan spiritual leader, has been administered with the first shot of the coronavirus vaccine at a hospital in India.

After receiving the injection, he urged people to come forward, be brave and get vaccinated.

“In order to prevent some serious problems, this injection is very, very helpful,” he said.

Dr GD Gupta of Zonal Hospital, where the shot was administered, told reporters that the Dalai Lama was observed for 30 minutes afterwards.

He said: “He offered to come to the hospital like a common man to get himself vaccinated.”

Ten other people who live in the Dalai Lama’s residence were also vaccinated, Dr Gupta said. All eleven received the Oxford University/AstraZeneca vaccine.

India has confirmed more than 11 million cases of the coronavirus and over 157,000 deaths. The country, which has the second-highest caseload in the world behind the US, rolled out its vaccination drive in January, starting with healthcare and frontline workers.

Earlier this month, it expanded its inoculation drive to older people and those with medical conditions that put them at risk.

The Dalai Lama made Dharmsala his headquarters in 1959, fleeing Tibet after a failed uprising against Chinese rule. China does not recognise the Tibetan government-in-exile and accuses the Dalai Lama of seeking to separate Tibet from China.

The Dalai Lama denies being a separatist and says he merely advocates for substantial autonomy and protection of the region’s native Buddhist culture.