Sex workers’ prices plummet as coronavirus leaves them without protection 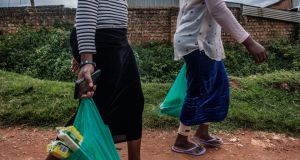 When she laughed and refused, her visitor called the police, reporting Anya for being a “malaya” – a prostitute – and saying she was violating coronavirus restrictions.

“Before Covid-19, it was not bad. Now, life is hard,” said Anya, one of two interviewees who asked that her name be changed. “Men I fear. My life is not good.”

Sex workers have always been stigmatised and isolated across the world, but the coronavirus pandemic means they are struggling even more. Their income has disappeared due to government restrictions and civilian concerns about the spread of Covid-19, yet they usually fall outside the net of those who get protection.

In the UK, charities say sex workers are now at greater risk of assault, and less likely to report violence for fear of being arrested. In Kenya and South Africa, medics worry about an increase in HIV transmission, because sex workers can’t access drop-in clinics and other services.

Bangladesh, Georgia, Russia, Germany, the Netherlands and the United States are other countries where organisations representing sex workers have appealed for urgent help.

Selling sex is illegal in Uganda, under a 1950 penal code. Despite this, the Ugandan government enlisted sex worker ‘Bad Black’ – whose real name is Shanitah Namuyimbwa – to “urge” women not to sleep with foreign truck drivers, out of concern that’s how coronavirus is spreading.

Along with public messaging came a vicious crackdown. In April, Ugandan civil society groups spoke out after 71 women were arrested in just 24 hours. “Sex workers are being targeted with violence, blackmail and arrest by police,” said Macklean Kyomya, the executive director of the Alliance of Women Advocating for Change, an umbrella network of grassroots sex worker-led organisations.

“Women doing sex work and their families were already starving because local government officials have denied them food aid. HIV-positive sex workers and their children are already struggling to get HIV treatment refills, PrEP, STI treatment and contraception because of poor government planning. Now they are being brutalised and traumatised, and forced to choose between starving, isolated with no income or working while risking their own health and safety.”

Banding together, a group of sex workers in northern Uganda threatened to publicly name their clients – whom they said included politicians and charity officials – if they weren’t classified as vulnerable and given food aid by local authorities. Some were quickly assisted, but others continue to slip through the cracks.

One mother, Simone, has been a sex worker for roughly a decade, since she was orphaned as a teenager. A week before the lockdown, she had a gun pulled on her by a man who slept with her and then refused to pay. She got away that time, but said she only continues in “the business” because she has no other way to make money.

Since the crisis started, Simone has dropped her rates as low as 2,000 (50 cent), out of desperation to feed her two young children. Men phone her around 4pm, she said, so she is gone from their homes by curfew. She is constantly fearful of contracting the virus herself.

“Renting the house. Something to eat.” She listed off her expenses, explaining that she hasn’t figured out how to pay her oldest child’s education fees when schools reopen. “Life is very difficult.”