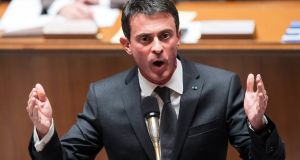 EU states will move today to strengthen controls at the EU’s external borders and enhance monitoring of people’s movement within the bloc after it was confirmed that one of Islamic State’s most high-profile European recruits had travelled undetected from Syria to Paris, where he is suspected of orchestrating Friday’s mass killings.

EU justice ministers will gather in Brussels for an emergency meeting a day after police confirmed Belgian national Abdelhamid Abaaoud (28) was killed during a seven-hour shoot-out with French police near Paris on Wednesday. Intelligence agencies had previously thought Abaaoud was in Syria.

Ministers will propose increasing scrutiny of EU nationals entering the Schengen free travel zone, a move prompted by the revelation that most of the Paris attackers were EU passport-holders who returned to Europe from Syria.

Introduction of the so-called Passenger Name Record (PNR) proposal has been resisted by a large cohort of the European Parliament amid concerns about data privacy.

Any substantive decision on the introduction of border checks at Europe’s internal borders is unlikely, however.

European Commission officials have stressed that the Schengen system – the free travel zone that has been the fulcrum of European integration for decades – is not in danger as the existing rules already permit member states to reinstate temporary border checks in emergency situations.

France and Belgium have responded to the Paris attacks, which left 129 dead and hundreds injured, with plans to give police sweeping new powers to clamp down on suspected terrorists.

The assembly also approved a law that means anyone suspected of posing a threat to national security can be placed under house arrest for 12 hours a day.

“This is the fast response of a democracy faced with barbarism. This is the effective legal response in the face of an ideology of chaos,” prime minister Manuel Valls told the assembly.

Later in the session, Mr Valls broke the news of Abaaoud’s death to applause from parliamentarians.

Moroccan-born Abaaoud was identified from fingerprints after the ferocious firefight at an apartment in Saint-Denis on Wednesday.