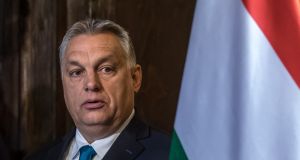 Hungarian prime minister Viktor Orban has decreed that the creation of a vast pro-government media conglomerate cannot be challenged by competition authorities, fuelling fresh fears for the country’s press freedom and rule of law.

Last week, the owners of some 480 newspapers, magazines, broadcasters and websites announced they were “donating” them to the Central European Press and Media Foundation, which is run by close Orban ally Gabor Liszkay and includes current and former members of the ruling Fidesz party on its board.

On Wednesday, Mr Orban signed a decree to shield the foundation from Hungary’s media and competition watchdogs, by declaring the merger to be an event of “national strategic importance” that serves “the public interest of saving print media”.

The new group unites many outlets that have been acquired in recent years by Orban loyalists, as he has sought to establish direct or indirect control over a swathe of previously independent institutions and media organisations.

The government’s voice is now dominant in Hungarian print and broadcast media, as it promotes main key anti-immigration and Eurosceptic messages and marginalises criticism of corruption and the country’s ailing public services.

“How far will Viktor Orban go?” asked Pauline Ades-Mevel, the head of the European Union and Balkans desk for media watchdog Reporters Without Borders.

“The merger of so many media outlets that support the same party has not been seen in Hungary since the end of the communist regime and is unprecedented in the European Union. Such a level of concentration makes us fear for the very survival of media pluralism in Hungary.”

Several major Hungarian national newspapers and all its regional newspapers are controlled by allies of Mr Orban, including his childhood friend and former gas fitter Lorinc Meszaros, who is now one of the country’s richest tycoons.

“The biggest advertiser in Hungary is the state. It can channel a lot of money to outlets it likes and make sure the ones it doesn’t like don’t get money,” explained Anita Komuves, a journalist at investigative news website Atlatszo.

“Even big companies, including international ones, want to be friendly with the government, so if they know there is an outlet that the government doesn’t favour, then they know they are not supposed to advertise there,” she added.

“So an independent outlet bleeds money . . . and an oligarch turns up and buys it, the editor and journalists leave and they are replaced by pro-government people and – voila! – you have a pro-government propaganda outlet.

“Orban can go to Brussels and say ‘I’m not putting journalists in jail, everything is fine, it’s just market forces’ – but it’s not.”

The EU is suing Hungary over its policies on migration, NGOs and education, but Mr Orban insists he is fulfilling the demands of a nation that re-elected him in a landslide vote in April.

Earlier this week, the renowned Central European University announced that a dispute with the government was forcing it to move most courses out of Hungary, where it has been a bastion of liberal values since its foundation in 1991.