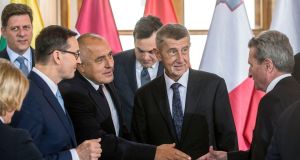 Ireland is set to pay some €760 million a year more on average into the EU budget if European Commission proposals are agreed by member states.

The commission on Tuesday in Brussels unveiled its proposed breakdown of member state contributions for the largely stalled talks on the 2021-2027 budget, the multiannual financial framework (MFF), a challenge at least as difficult as Brexit.

The required unanimity on a budget compromise from EU leaders this year is now unlikely, but further delays may jeopardise ongoing programmes, the commission warns.

The Irish figure, if agreed, would raise Ireland’s contribution as a share of national product (gross national income or GNI) by a 10th to 0.91 per cent of GNI.

Last year Ireland contributed some €2.3 billion to EU coffers, and by one controversial measure received back some €2 billion in EU benefits – by this measure it has been a “net contributor” for the last two years.

In its presentation on Tuesday, the commission’s combative director general of the budget directorate, Gert Jan Koopman, denounced the widely used idea of “net contribution” as a measure of fairness of national budget contributions.  Benefits of EU membership to individual states go far beyond direct cash payments to them, and are not allocated as such in the crude “net contributor” model, he argues.

The commission, by way of illustration, on Tuesday published figures from a number of independent think tanks showing the estimated benefits to economies of the single market. Ireland benefits to the tune of €30.7 billion every year from its ability to trade freely across the EU, the figures indicate, representing some 10 per cent of its GNI, and worth 10 times its annual projected contribution to the EU budget.

Other “net contributors” such as Germany and France benefit from the single market annually to the tune of €208 billion and €124 billion respectively, five times their total EU contributions.

The underestimation of EU benefits runs right across the EU’s programmes, Koopman argues, citing the case of the location of the European Medecines Agency, whose €350 million budget has a huge effect on the Dutch economy while the central EU contribution of €25 million is all that appears in the Dutch national accounts (the rest is paid by industry).

And how do you allocate to individual member states the benefits of EU spending on development aid in the Third World?

Koopman denounces what he calls the limited “accounting perspective” of ministers who are refusing to recognise the benefits of EU-wide investment. “Are they really serving the economic interests of their citizens?”

Responding to suggestions that hard-pressed finance ministers, in objecting to increases in the EU budget, are only being prudent with taxpayers’ money he points to the reality that while the EU is proposing to spend a grand total of 1.1 per cent of union GNI – €136 billion a year by 2017 – member states’ domestic budgets eat up on average to 47 per cent of national GNIs.

Spending a bit more on the EU should not be beyond them, he says.

The commission’s plans involve increasing the daily cost of the EU to individual citizens from €0.66 to €0.79, an average annual increase over seven years of two cent. But that would mean an increase of €8.5 billion in Germany’s annual contributions by 2027, close to a third, and €2 billion for the Netherlands, one of the “frugal five” determined to cut the budget in real terms.

Poland would face a rise in contributions in the same period of €1.6 billion; Italy, of €130 million.

On the spending side of the equation, the proposed budget may be larger in cash terms than the last, but the commission argues that at 1.14 per cent of the union’s GNI it is actually smaller than the current figure for the 27 member states of 1.16 per cent of GNI.

That GNI percentage target, however, is highly contested. MEPs say the job cannot be done for less than 1.3 per cent – an increase of 14 per cent on the last budget – while member states such as Spain and Portugal have demanded a budget size in the range of 1.14 per cent to 1.16 per cent of GNI.

A Finnish presidency attempt to broker agreement at the last summit failed spectacularly when it set a target figure at close to 1.0 per cent, angering many member states including Ireland.

It’s a huge challenge, and Brexit is only the start of the problem – it represents a €13 billion annual hole in the budget.

Member states have agreed that the new budget must take on board a number of new priorities – spending on new programmes such as migration and a border protection force, new defence and security measures, and a programme on the digital economy. In addition they want to substantially increase the Erasmus programme for students and research funding.

To that end there have been cuts proposed by the commission to both farm spending (roughly 5 per cent) and cohesion funding (about 7 per cent) – the largest of the EU’s spending programmes. The Common Agricultural Policy alone currently represents some 40 per cent of EU spending – it and cohesion will fall to 29 per cent each of the overall budget at the end of seven years.

A defence of both programmes is being mounted by the “Friends of Cohesion” group – Bulgaria, the Czech Republic, Cyprus, Croatia, Estonia, Greece, Hungary, Latvia, Lithuania, Malta, Poland, Portugal, Slovakia and Slovenia – who met in Bratislava on Tuesday.

So-called “new and reinforced” spending is set to rise to 35 per cent of the overall EU spend. .

It is a circle that will not square without the majority of member states agreeing to significant increases in their contributions. Ireland, despite its new status as a “net contributor”, has pledged its support to the defence of the CAP and cohesion funding, and has said it is willing to raise its contributions but not by how much.

Taoiseach Leo Varadkar, addressing an agribusiness conference in Dublin recently, said the Government was “very busy building alliances” to protect the CAP and to ensure it continues to be well-funded.

As a consequence, he said the State was prepared to contribute more to the EU budget, but this was not unconditional – successful programmes such as the CAP, the Horizon research strategy and the Erasmus education programme would have to be retained.

Minister for Finance Paschal Donohoe may be balking, however, at the commission’s ambitious proposals.