Christmas celebrations cancelled in Iraq in solidarity with protesters 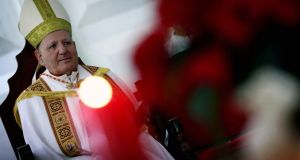 Patriarch of the Chaldean Church, Louis Raphael Sako: “There will be no decorated Christmas trees in churches or streets, no celebrations and no reception at the patriarchate.” Photograph: Safin Hamed/AFP via Getty Images

Iraqi Christians have cancelled public Christmas celebrations in solidarity with protesters who have been killed and wounded in anti-government demonstrations.

“There will be no decorated Christmas trees in churches or streets, no celebrations and no reception at the patriarchate,” Chaldean Catholic patriarch Louis Raphael Sako announced. His community is one of the largest in Iraq and the diaspora.

At least 430 protesters have been killed and 20,000 wounded by live fire and military-grade tear gas not meant for crowd control.

The patriarch’s announcement coincided with a gathering in Baghdad of Iraqi politicians threatened by the revolt and their Shia regional allies whose involvement in Iraq’s affairs is vehemently rejected by the protesters.

The aim of the meeting was to reach consensus on a replacement for prime minister Adel Abdel Mahdi, whose resignation last week was celebrated as a victory for protesters. They want a neutral caretaker cabinet to be formed, fresh elections excluding the ruling parties, and a transition from the sectarian power-sharing parliamentary model to a secular presidential system.

Security forces and pro-Iran militiamen have failed to suppress mass demonstrations staged since early October in Baghdad and the south against mismanagement, corruption, and lack of services and jobs. Sectarianism is blamed for the collapse of Iraq, a major global oil exporter where 20 per cent of the population lives in poverty and 25 per cent of youths are unemployed.

Youths, who have surged into the streets, make up 60 per cent of Iraq’s 40 million people. They see no future for themselves as long as the current regime remains in power.

While the majority of the protesters have been Shias, who constitute the largest faith community in Iraq, Sunni majority Mosul has held strikes and funeral marches for those who died and Sunni majority Saladuddin province has declared three days of mourning for victims. Students have marched in Arab-Kurdish Kirkuk.

Shia activists have asked other communities for support but urged their members to stay off the streets. Organisers do not want the Shia-dominated authorities to claim the mass action is anti-Shia. Protesters blame Iraq’s ills on the pro-Iranian Shia fundamentalist exiles who came to power in 2003 during the US occupation.

The Chaldean church is an offshoot of the Eastern Church founded in the first century by Assyrians who spoke Aramaic, the language of the region at the time of Jesus. In order to create a united front other Iraqi churches are likely to join the Chaldeans.

Iraq’s Christian community has been dramatically depleted by attacks by Sunni fundamentalists and driven into exile by Islamic State’s false caliphate in the north, where many Christians have lived for millennia. Only 500,000 remain of the 1.5 million who dwelt in Iraq before the US occupation.