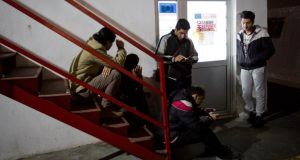 Migrants wait for medical assistance at a migrant facility in Bihac in Bosnia-Herzegovina. Photograph: Darko Bandic/AP

Amnesty International has said the European Union is complicit in Croatia’s “unlawful and frequently violent” treatment of asylum seekers arriving from Bosnia, where concern is growing over a possible spring surge of migrants on the move.

Bosnia registered more than 20,000 refugees and migrants from the Middle East, Central Asia and North Africa last year – compared with just 755 in 2017 – as they sought new ways into the EU around tightening Balkan border controls.

Most arrived from Montenegro having travelled through Turkey, Greece and Albania, and headed for northwest Bosnia in the hope of crossing its wooded hills into EU member Croatia and continuing towards Italy and Austria.

Massimo Moratti, director of research for Amnesty International’s Europe office, said: “People fleeing war and persecution are beaten and robbed by the Croatian police and forcibly pushed back to legal limbo, left at the mercy of a failing asylum system in Bosnia.”

“European governments are complicit in the systematic, unlawful and frequently violent pushbacks and collective expulsions of thousands of asylum seekers to squalid and unsafe [Bosnian] refugee camps,” the rights group said on Wednesday.

“To understand where the priorities of European governments lie, one only needs to follow the money. Their financial contribution towards humanitarian assistance is dwarfed by the funds they provide for border security which includes equipping Croatian border police and even paying their salaries,” Mr Moratti added.

“If any of the European countries wants illegal migrants, we can open a corridor and let them through as we did in 2015. But we know that this isn’t so . . . Every country in the world protects its borders and so does Croatia, and we will not allow illegal migration,” he told Croatian radio.

More than 5,000 migrants are now believed to be living in temporary accommodation in and around the towns of Bihac and Velika Kladusa, close to Bosnia’s border with Croatia.

“As temperatures rise and the snows melt, the number of people attempting to cross Croatia will swell and action must be taken to avoid a humanitarian crisis in on the edge of the EU,” Amnesty International warned.

Bosnian officials say they are concerned by a recent increase in migrants arriving from Montenegro and Serbia, and the state’s response is hampered by its ethnic divisions and failure to form a new government five months after elections.

“We expect the problem of migrants to escalate, not only in Bosnia but along this route,” Bosnian security minister Dragan Mektic said last week.

“It is not only Bosnia’s problem . . . We want to be part of the European solution, but the EU cannot agree on a solution. These illegal migrations have simply been allowed to continue,” he told the AFP news agency.