Ethiopian Airlines crash: Tributes to victims from more than 30 nations

Many aid workers and environmentalists travelling to Nairobi summit were killed 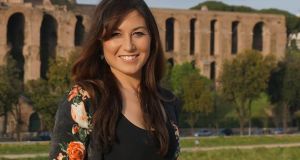 Joanna Toole, a 36-year-old from Exmouth, Devon, was heading to Nairobi to attend the UN Environment Assembly when she was killed in the Ethiopian Airlines crash. Photograph: Facebook

People from more than 30 countries were on board the Ethiopian Airlines Boeing 737 which crashed shortly after take-off from the Ethiopian capital of Addis Ababa on Sunday morning, killing all 157 people on board.

There was one Irish victim on board the flight – Micheál (Mick) Ryan, an engineer who worked for the UN’s World Food Programme’s engineering division who lived in Cork city. He was married with two young children and originally from Lahinch in Co Clare.

Meanwhile, families dotted across the globe are coming to terms with the loss of loved ones as details of the 157 passengers and crew who were on board the flight have begun to emerge. The victims included a large number of aid workers and environmentalists travelling to the UN Environment Assembly, which is taking place in Nairobi, Kenya this week. The conference opened on Monday with the UN flag flying at half-mast and a minute’s silence. At least 19 UN staff members died in the crash, an official has said.

The dead included 32 people from Kenya; 18 from Canada; nine from Ethiopia; eight from China; eight from both Italy and the US; seven from both France and the UK; six from Egypt; five from the Netherlands; four who had UN passports; four from both India and Slovakia; three from Russia; three each from Austria and Sweden; two from Morocco, Spain, Poland and Israel; and one each from Belgium, Indonesia, Uganda, Yemen, Sudan, Togo, Serbia, Mozambique, Norway, Rwanda, Ireland, Somalia, Saudi Arabia and South Africa.

Canadian Danielle Moore (24), who was on board the flight, posted on Twitter on Saturday that she was “so excited to share that I’ve been selected to attend and am currently en route to the @UNEnvironment Assembly in Nairobi, Kenya . . . I can’t wait to share what I’m learning along the way.” Ms Moore was originally from Toronto and had been living and working in Winnipeg.

Pilar Buzzetti (30) and Virginia Chimenti (26), both from Rome, Italy and working for the UN World Food Programme (WFP), were also heading to the assembly. Three members of the humanitarian organisation Africa Tremila, based in Bergamo, Italy, were also on board. The aid group’s president Carlo Spini (75), his wife Gabriella Viggiani and the charity’s treasurer Matteo Ravasio were among the eight Italians killed. Sicilian councillor for culture Sebastiano Tusa, a marine archaeologist, was also on the plane.

Joanna Toole from Exmouth, who was heading to the UN assembly, was described by her father as a “very soft and loving” woman whose “work was not a job – it was her vocation”. Speaking to the BBC, Adrian Toole paid tribute to the 15 years his daughter had spent working in international animal welfare organisations. “I’m very proud of what she achieved. It’s just tragic that she couldn’t carry on to further her career and achieve more.”

Sarah Auffret, a polar tourism expert, was going to the assembly to discuss plastic pollution in the seas, according to her Norway-based employers Association of Arctic Expedition Cruise Operators (AECO). Ms Auffret was raised in France and held dual French-British citizenship. A statement from the University of Plymouth described Ms Auffret as “an exemplary student who fully embraced university life and took every opportunity to develop herself while she was here. She is remembered as someone who had a passion for learning about Europe and a strong moral compass.”

Joseph Waithaka (55) had lived in Hull for a decade before moving back to his native Kenya. His son told the Hull Daily Mail that his father had worked for the probation service and that he “helped so many people in Hull who had found themselves on the wrong side of the law”.

“He’s someone who really loved justice, and didn’t give up on people most people had given up on,” his son said. “He was a father not just to us but to so many people in so many ways.”

Anton Hrnko, an MP with the Slovak National Party, posted on Facebook that his wife Blanka, daughter Michala and son Martin were among the dead. “I announce with deep sadness that my beloved wife Blanka, my son Martin and my daughter Michala died in the air disaster in Addis Ababa today, in the morning hours. Who knew them, pay them quiet tribute.”

Karim Saafi (38), a French-Tunisian civil society activist who was living in Brussels, was on board the flight. A statement from the PanAfrican Youth union paid tribute to Mr Saafi, writing that he had always fought for the rights of young Africans to a better future. The union wrote that African youth had lost one of their greatest representatives and that Mr Saafi would be remembered as a smiling, kind man who made everyone feel at ease.

The German foreign ministry confirmed that at least five German citizens had died in the crash including German pastor Rev Norman Tendis (51) who was travelling to the environmental summit. German citizen Anne-Katrin Feigl, who worked with the International Organisation for Migration, was also on board the flight.

Three Russians were confirmed dead, including Ekaterina Polyakova and her husband Alexander Polyakov, who were on their way to Kenya for a holiday. Ms Polyakova posted a video online shortly before the flight took off showing herself and her husband about to board the plane and joking about the cold Russian winter they had left behind. Russian citizen Sergey Vyalikov was also named as one of the victims.

The Ugandan police commissioner Christin Alalo was on board the flight. A statement from the Ugandan authorities described Ms Alalo as a “highly respected member of the force who loved her job”. It is understood Ms Alalo was returning from Italy.

Jonathan Seex, chief executive of the hospitality company Tamarind Group, who lived in Kenya but was originally from Sweden, was also killed.

China said two UN workers were among the eight Chinese nationals killed in the crash, while the other passengers included four who were working for a Chinese company and two who were travelling to Ethiopia for private matters.

Max Thabiso Edkins (35), who was born in Lesotho and grew up between Lesotho, Germany and South Africa, was confirmed dead by the World Bank, where he worked. The Catholic Relief services said “with heavy hearts” that four of its Ethiopian colleagues – Sara Chalachew, Getnet Alemayehu, Sintayehu Aymeku, and Mulusew Alemu – died in Sunday’s crash.

Cedric Asiavugwa, a third-year law student at Georgetown University in the US, was on his way home to Nairobi after the death of his fiancee’s mother. A statement from the Georgetown law dean said the university had lost “a stellar student, a great friend to many, and a dedicated champion for social justice across East Africa and the world”.

A Greek man, who was due to fly on the Ethiopian Airlines flight, arrived at the gate late and was placed on another flight, according to the Associated Press. “I saw the last passengers going through but the gate had already closed. I complained, in the usual way when that kind of thing happens. But they were very kind and placed me on another flight,” Antonis Mavropoulos told Greece’s private Skai Television, speaking from Nairobi.

Mr Mavropoulos, who runs a recycling company and lives in Athens, was travelling to Kenya to attend the environmental conference. “I’m slowly coming to terms with what happened and how close it came. On the other hand, I’m also very upset – I’m shattered – for those who were lost.”