Equal pay for men and women? Iceland asks employers to prove it 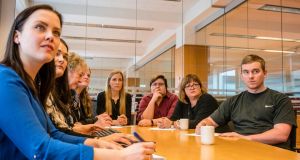 The tax department of the the Icelandic customs agency, where most jobs are held by women and only a few by men, in Reykjavik, Iceland. Photograph: Bara Kristinsdottir/The New York Times

On a chilly afternoon in October, Frida Ros Valdimarsdottir, a former home-care worker turned women’s rights advocate, left her office at exactly 2.38pm and headed to Reykjavik’s main square, where throngs of women were forming a boisterous crowd. It was the time – roughly 2½ hours before the end of the work day – that many protesters reckoned they stopped being paid for equal work.

The rally was part of a groundswell for income equality that galvanised tens of thousands of women across this tiny island nation, where protests often produce change. “For decades, we’ve said we’re going to fix this,” said Valdimarsdottir, chairwoman of the Icelandic Women’s Rights Association and an organiser of the demonstration. “But women are still getting lower pay, and that’s insane.”

The government wants to change that dynamic. Iceland on Tuesday became the first country to introduce legislation requiring employers to prove they are paying men and women equally. Iceland has had equal pay laws for half a century, pushing companies and the government to gradually reduce the pay gap. But the thinking behind the new legislation is that unless the laws are applied more forcefully, the imbalance may never really close.

“We want to break down the last of the gender barriers in the workplace,” said Thorsteinn Viglundsson, Iceland’s social affairs and equality minister. “History has shown that if you want progress, you need to enforce it.”

Iceland, with a population of 330,000, is a forerunner in promoting gender equality. Nordic countries lead most other nations in equality policies that include gender quotas on boards and generous parental leave, and Iceland consistently appears at or near the top of international rankings for fairness.

Yet equality in pay and inclusion in the upper ranks of the workplace have lagged. Women in Iceland still earn 14 per cent to 20 per cent less than men, according to the government. Iceland wants to bridge the gap within five years, a move the government argues may speed progress in other areas. The global gender pay gap will not close for 70 years unless such efforts accelerate, according to the International Labour Organisation.

The proposed legislation follows an equal pay pilot programme in which government bodies and companies identified chronic hurdles that block women from higher-paying jobs: women occupy different professions from men and fewer high-level positions, contributing to lower pay. Some employers in the programme are now seeking to hire more women for jobs traditionally held by men.

Valdimarsdottir, the women’s rights advocate, quit her home-care job for the municipality of Reykjavik. She had discovered that an accountant for the municipality was paid four times as much as Valdimarsdottir was for her management role overseeing a 10-person team providing home-care services, comprising mostly women. Later, the city adjusted the salary for her former position to be nearly equal with the accountant’s, and raised salaries for the other workers.

Many Icelandic companies already embrace a voluntary equal pay standard forged by business organisations and labour unions. But business groups say it should not be imposed, particularly given the administrative burden of compliance, especially for small firms.

“Companies should do this for their own benefit and the benefit of their employees,” said Halldor Thorbergsson, the director general for the Confederation of Icelandic Employers. “But it should not be legalised.”

Businesses in other countries are also wary of government intervention, including in Britain, which recently required companies with 250 employees or more to publicly report their gender pay differences. Austria and Belgium have similar rules. In the United States and Switzerland, federal contractors must report wage information by gender to the government.

Icelandic women have long argued that equality needs a national push. In 1974, 90 per cent of women walked off jobs and out of their homes to show how society would be affected if they did not work. That watershed moment soon led to the world’s first democratically elected female president, Vigdis Finnbogadottir, in 1980.

Yet many women still have less economic power than men. Top level and intermediate managers are mostly men, and the pay gap is especially persistent for working mothers and women in female-dominated fields. The new rules would require the biggest companies and government agencies to undergo audits, starting in 2018, and to obtain a certification of compliance with equal pay rules.

Businesses with more than 25 employees must comply by 2022. Employers must assess every job, from cleaner to senior executive, to identify and fix wage gaps of more than 5 per cent. Although the process requires time and money, Arni Kristinsson, the managing director of BSI Iceland, a standards auditor that performs some of the fair pay reviews, said those costs were not insurmountable.

“The question is, are companies committed?” he said. “At firms that are, we are already seeing the pay gap narrow” to as little as 3 per cent.

The audits revealed other workplace inequalities linked to pay. At the Icelandic Customs agency, which participated in the pilot programme, officials found that salaries were lower when women were employed as a large group.

About 80 per cent of Iceland’s uniformed customs agents are men, a group paid 30 per cent more than customs tax collectors, who are mostly women. The agents work longer hours and face challenges like inspecting cargo for drugs, so the review found the pay system was justified, said Snorri Olsen, Iceland’s customs director. But the review also spurred a reassessment of the gender balance in each group.

The agency is now trying to recruit more men for office work and more women into the higher-paid agent jobs, partly by shortening shifts to accommodate women who have childcare demands, Olsen said. “There’s a tendency to look at work usually done by men as more valuable,” he said. “This is technically a discussion of equal pay, but it’s really a question about equality in our society.”

The audits help promote self-reflection, even among female managers, about the potential for unconscious bias anywhere.

At a Reykjavik-based ad agency called the White House, Anna Kristin Kristjansdottir, a board member and owner, said the equal pay audit revealed leanings in the 45-person work force, including the proportion of higher-level jobs held by men. Like the customs agency, she is seeking to even the percentages, especially in upper management, where she aims to achieve gender parity.

Whether such adjustments work are debatable. Some studies show pay gaps between men and women reside largely within occupations, not between them. Equally disturbing to Kristjansdottir was that women negotiated lower salaries than men. Generally, men are four times as likely to ask for a raise, and when women ask, they seek 30 per cent less on average.

“You’d be sitting there doing the interview, and they’d ask for less,” Kristjansdottir said. “The audit showed this was a flaw in our recruitment, that we were allowing this to happen and didn’t quite realise it.”

For Viglundsson, the government official, the fact that larger equality issues surface in the debate over equal pay is justification enough for the legislative proposal. “When it comes to the workplace, men have enjoyed a certain level of privilege for a long time,” he said. “But if you look at the vested interests for society of eliminating discrimination against women, that far outweighs any regulatory burden.”

1 The Sack of Balbriggan: The burning of a town that shocked the world 100 years ago
2 Coronavirus: 396 more cases as public is urged to help protect ‘older and vulnerable’
3 The FinCEN files: The billion dollar a month money trail
4 Lockdown measures and rising anger in Madrid as Covid takes hold again
5 Covid-19 cases among older people continue to rise sharply
Real news has value SUBSCRIBE