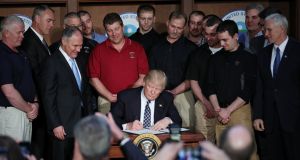 Arguably most significant was his announcement of a review of Obama’s signature Clean Power Plan by the Environmental Protection Agency.

While Mr Trump cannot legally roll back the 2015 legislation, he ordered the EPA to start the legal process of revoking and rewriting the plan, a process that is expected to take at least a year.

Mr Obama’s signature climate change policy, which restricts carbon emissions from coal-powered power plants across the US, had already been under attack.

The legislation has been on hold since last year following a federal court appeal by several Republican-controlled states and more than 100 energy companies.

Flanked by more than a dozen coal miners as he signed the order, Mr Trump said the new proposals were about “putting an end to the war on coal” which he said had been ongoing for longer than eight years as he pledged to bring back US manufacturing jobs to America.

The concept of global warming was created by and for the Chinese in order to make U.S. manufacturing non-competitive.

Mr Trump said he had met many miners on the presidential election campaign who had talked about the attacks on their jobs and livelihoods.

“I made them this promise. We will put our miners back to work,” Mr Trump said, predicting that the new proposals would lead to “unbelievable prospering all throughout our country”.

Though the executive order made no mention of the Paris climate agreement signed by the US and hundreds of other countries last September, the move to dismantle the Clean Power Plan is likely to significantly impinge on US ability to reduce greenhouse gas emissions.

Environmentalists immediately criticised the order, which they say will set back US energy policy by decades. The US is the world’s second largest emitter, and is seen as a leading player in the fight against global warming and climate change.

Former US vice-president and climate change activist Al Gore said the order was a “misguided step away from a sustainable, carbon-free future for ourselves and generations to come”.

“It is essential, not only to our planet, but also to our economic future, that the United States continues to serve as a global leader in solving the climate crisis by transitioning to clean energy,” he said in a statement.

“We will eliminate federal overreach, restore economic freedom and allow our companies and workers to thrive and succeed on a level playing field for the first time in a long time,” he said, adding that the states, and not the federal government, were best placed to decide on environmental matters.

Mr Pruitt said earlier this month he did not necessarily believe that carbon leads to global warming.

On Sunday he described last year’s Paris climate agreement as a “bad deal”, arguing that China and India were treated too leniently.