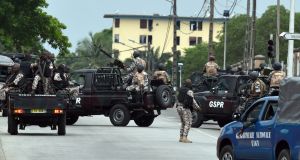 Mutinous soldiers in Ivory Coast shot three people on Saturday and cut off access to the second-largest city, Bouake, as a revolt escalated over demands for bonus payments.

The revolt began in Bouake early on Friday before spreading quickly, following a similar pattern to a mutiny by the same group in January that paralysed parts of Ivory Coast and marred its image as a post-war success story.

Mutineers seized control of the national military headquarters and defence ministry in the centre of the commercial capital, Abidjan, on Friday.

They stepped up the pressure on Saturday, blocking roads out of Bouake, the epicentre of January’s uprising, and protesting around the country, including the northern city of Korhogo, where two men on a motorcycle were shot in the legs as they tried to get through a roadblock manned by the mutineers.

“They shot at them. They were wounded and transported to the hospital,” said witness Amadou Yeo.

In Bouake, soldiers fired on a group of demobilised former rebels, seriously wounding one of them, according to their spokesman and a local politician.

Sgt Seydou Kone, a spokesman for the mutineers, said the ex-fighters, who went through a disarmament programme following the country’s 2011 civil war, were planning their own protest, as they did early this week, and his men had opened fire to stop them.

“We do not want to negotiate with anyone,” said Sgt Kone by phone from Bouake, in the centre of the country. “We’re also ready to fight if we are attacked. We have nothing to lose.”

In a statement on state television late on Friday, Gen Sekou Toure, the army’s chief of staff, threatened the soldiers with severe sanctions if they did not end the revolt.

Ivory Coast’s defence minister and government spokesman could not be reached for comment on Saturday.

The soldiers were promised bonus payments by the government after the January mutiny but it has struggled to disburse the money following a budget crunch caused by the collapse in the price of cocoa, Ivory Coast’s main export.

Ivory Coast has emerged as one of the world’s fastest growing economies following a decade-long political crisis ended by a 2011 civil war. But deep divisions persist, particularly in a military assembled from former rebel and loyalist combatants.

The government has already paid 8,400 soldiers - most of them former rebels who helped bring President Alassane Ouattara to power - bonuses of 5 million CFA francs ($8,400) each as part of a deal to end the January revolt.

On Thursday, following a meeting with authorities in Abidjan, a spokesman for the group said they would forego demands for remaining bonuses of 7 million francs.

But that decision was rejected by some of the soldiers.

Bouake residents said shops were closed as soldiers fired weapons in the air and patrolled the streets in cars.

Mutineers also took control of the northern city of Odienne and there was sporadic gunfire in Daloa, the main cocoa-growing hub in southwestern Ivory Coast, which is the world’s top producer of the chocolate ingredient.

Hundreds of people, meanwhile, gathered for a rally against the revolt close to the military headquarters in Abidjan, which was still being held by the mutineers.