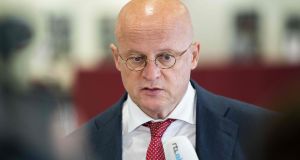 The Dutch public prosecution service has reversed an earlier decision and fined the country’s justice minister for failing to observe Covid-19 regulations during his highly publicised summer wedding last month – leaving him with a criminal record.

Around the time the “Golfgate” controversy was raging in Ireland, photographs of the former law professor’s nuptials, followed by a rather half-hearted initial apology, provoked a flood of coruscating media coverage and a full-scale row in parliament.

The prosecution service has now taken the highly unusual step of issuing a statement confirming the fine, which it said had been decided at the highest internal level by its board of procurators-general.

In response the minister, Ferdinand Grapperhaus (60) – who as justice minister is responsible for implementing coronavirus legislation – commented only: “If the department says the rules have been broken and I have to pay a fine, then that is the case.”

The standard fine of €390 will leave Mr Grapperhaus with a criminal record, because in the Netherlands this is routine in the case of all fines over €100.

However, in another controversial twist, the government has now agreed to review the question of whether Covid-19-related fines should automatically lead to such a record – which could make it difficult for applicants to get a special certificate of good behaviour that is required for some jobs.

Mr Grapperhaus made a second, more heartfelt, apology in parliament, and a contribution of €780 to charity that was widely seen as an attempt to avoid a fine. A relaxation of the relevant rule would mean the minister’s new criminal record would promptly be expunged.

In a country where more than 15,000 Covid-related fines were issued between mid-March and mid-July alone, such a relaxation – the Grapperhaus controversy aside – might also be a popular pre-election move by the coalition government.

It could also short-circuit a potentially costly legal situation in which thousands of those fined have already lodged appeals.

Initially Mr Grapperhaus said social distancing protocol had been abandoned for just a few minutes during a group wedding photograph, which was leaked to the media. However, more pictures a few days later showed it was widely abandoned at the wedding reception as well.

Just six months from a general election, prime minister Mark Rutte supported his Christian Democrat justice minister, who as a result survived a no-confidence vote in parliament earlier this month despite opposition demands for his resignation.