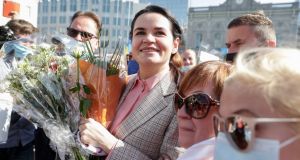 The European Union’s member states failed to reach a consensus to impose sanctions on Belarusian officials in response to a rigged election and a crackdown on demonstrators because Cyprus opposed the measure, officials said on Monday.

Cyprus was supportive of sanctions in theory, but would not back the punitive action unless Turkey was also rapped for drilling for gas in disputed waters in the eastern Mediterranean, officials said.

Protesters waving Belarusian flags and holding posters reading “Europe help Belarus” and “Stop terror in Belarus” chanted and sang outside EU buildings as the foreign ministers of the 27 member states met to deliberate on the issue.

Opposition leader Svetlana Tikhanovskaya travelled to Brussels to appeal to the EU to break the diplomatic standoff, and urged ministers to cut any financial support to the Belarusian government at a breakfast meeting earlier on Monday.

“EU leaders have reasons not to push sanctions but I asked them to be more brave,” Ms Tikhanovskaya, who left Belarus for Lithuania after the election, told reporters.

“Sanctions are important in our fight because it’s part of pressure that could force the so-called authorities to start dialogue with us in the opposition council.”

The EU’s foreign affairs chief Josep Borrell has said the August election was “fraudulent” and that the bloc does not recognise Alexander Lukashenko as the legitimate president of Belarus.

“Although there is a clear will to adopt the sanctions, the required unanimity was not reached,” Mr Borrell told reporters following the meeting. “If we are not able to, then our credibility is at stake.”

EU Commission president Ursula von der Leyen last week called on member states to drop a requirement for unanimity in foreign policy matters, particularly on human rights and sanctions issues, which are frequently held up by the objections of one or two member states.

The matter has been moved up for discussion among national leaders when they meet in Brussels on Thursday, and foreign minister Simon Coveney said a compromise would likely emerge by then.

“The Irish position on this is among the strongest in the European Union in terms of willingness to support sanctions,” Mr Coveney said. He added that not every member state supported including Mr Lukashenko on the list of sanctioned officials but that Ireland backed this.

“Irish people have a connection with Belarus, an emotional one that involves hundreds of children coming to Ireland every summer. I think this is a political issue that a lot of Irish people, Irish families, will watch very closely.”

Mr Coveney said Ireland would be open to the proposal to allow decisions to pass with qualified majority support rather than unanimity in human rights issues, but would be cautious towards scrapping unanimity on any areas that could impact on Irish neutrality.

As a child Ms Tikhanovskaya spent summers in Roscrea, Co Tipperary, with other children from areas affected by the Chernobyl disaster.