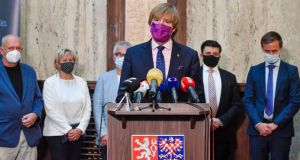 Czech health minister Adam Vojtech has resigned amid criticism of the government’s handling of a surge in coronavirus cases, as infection rates rise across much of a region that coped relatively well with the first wave of the pandemic.

The Czech Republic now has one of the fastest-growing infection rates in Europe and registered a daily rise of more than 2,000 new cases several times over the past week. In spring, when the Prague government was one of Europe’s first to impose tight restrictions to fight the virus, new cases peaked at 377 on March 27th.

Buoyed by that initial success and keen to revive the Czech economy, the government of populist billionaire Andrej Babis was quick to lift almost all anti-coronavirus rules by early summer, only to see infections climb sharply as people resumed socialising, returned home from holidays and schools reopened.

Mr Babis rejected a proposal from Mr Vojtech last month to make mask-wearing compulsory again on public transport and in shops and other indoor spaces, only for the measure to be approved later as coronavirus continued to spread quickly.

“After careful consideration of the current situation, I have decided to resign,” Mr Vojtech said on Monday.

“We have been dealing with Covid for almost half a year. I was the ‘minister of Covid’. My colleagues and I did our best to protect the citizens of this country,” he added.

“I don’t feel I have anything to be ashamed of,” said Mr Vojtech, who faced particular criticism over problems that have plagued the electronic application to track and trace Czech coronavirus cases.

“The prime minister is more responsible as he strongly and incompetently interferes with health ministry work,” said Marian Jurecka, chairman of the Christian Democrats.

Mr Babis said that Mr Vojtech’s replacement would be epidemiologist Roman Prymula, who was a prominent and outspoken Czech figure during the first wave of coronavirus, when he served as a deputy health minister.

Mr Prymula warned at the weekend that Czech coronavirus cases could rise by 8,000 per day in the near future unless preventative action was taken: “It’s not a disaster, but it’s a state of crisis that needs to be significantly slowed down,” he said.

A government coronavirus crisis committee was expected to meet on Monday evening for the first time in several months: “It’s time for us all to co-operate, to do our maximum to end the spike,” Mr Babis said.

Several other countries in the region have also recently registered record daily rises in coronavirus cases, including Croatia, Slovenia, Montenegro and Greece, which dropped most health restrictions during the summer to help their tourism-dependent economies.