Poor medical training may be factor in deaths, officials say, with 1,100 killed in outbreak so far 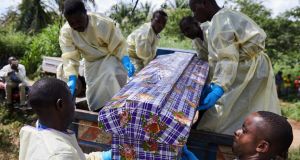 Health workers take part in the funeral of Kahumbu Ngalyakuthi, a woman who got infected in her home village of Mutwanga, some 40km from Beni in North Kivu province, Democratic Republic of the Congo, on May 12th. Photograph: Hugh Kinsella Cunningham/EPA

As the Democratic Republic of Congo continues to struggle with the second largest Ebola outbreak in recorded history, officials say poor medical training may be leading to more deaths.

More than 1,100 people have been killed in the outbreak, which began in August last year, according to the DRC’s ministry of health. At least 34 healthcare workers were among them, according to health services, and about 100 have been infected.

Aid agencies say the Ebola outbreak in rural eastern DRC is out of control, and spreading quickly. Incidence rates have doubled from March and quadrupled from February, according to the ministry of health. Roughly half of all new cases were detected only after the infected person died.

Just one-third of people who contract Ebola in the DRC survive it – a lower rate than in previous outbreaks.

Marcus Bachmann, Médecins Sans Frontières deputy head of mission for the Ebola emergency, told The Irish Times that the escalating number of Ebola cases, along with ongoing hostility towards healthcare workers, have shown there need to be more efforts to involve local communities in the response to the outbreak.

“Families and patients need to get a choice about the way they will be tested, treated, and whether they’ll be isolated,” he said. “The communities and the families will resist if that’s not the case.”

Regular attacks on clinics and healthcare workers have impeded the Ebola response, and forced some international organisations to shut down facilities. Locals – many of whom are opposition supporters – are suspicious of the government, and rumours and misunderstandings about Ebola are adding to that distrust. Scores of armed groups are also active in the area.

DR Congo’s national Ebola response co-ordinator, Dr Aaron Aruna, told the BBC on Wednesday that many Congolese healthcare workers haven’t been properly trained, and one recent death was of a doctor who didn’t believe Ebola existed. “The quality of medical tuition is the problem, and sometimes you don’t know whether you are dealing with a real doctor, someone with a bogus degree, or just someone who’s had poor training,” he said.

After visiting eastern DRC, Tedros Adhanom Ghebreyesus, the director general of the World Health Organisation, said he is “profoundly worried” by the Ebola outbreak.

“A major surge in political & financial support from all national & international actors is urgently needed,” Mr Ghebreyesus said on Twitter.

Mr Ghebreyesus also said the security situation in the region is impeding the response. “When we cannot reach people, they do not get the chance to be vaccinated or to receive treatments if they fall ill. The tragedy is that we have the technical means to stop Ebola, but until all parties halt attacks on the response, it will be very difficult to end this outbreak.”

More than 30,000 frontline and health workers have now been vaccinated against Ebola, the WHO says.

There have been nine previous Ebola outbreaks in the DRC, but each one has been successfully contained. An outbreak in west Africa, between 2014 and 2016, led to more than 11,000 deaths.