Cypriots row over borders amid migrant and coronavirus fears 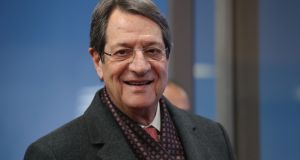 Cypriot president Nicos Anastasiades: ‘We acknowledge human suffering. But at the same time, we must take measures against efforts to alter the demographic character of our country.’ Photograph: Ludovic Marin/AFP via Getty Images

Migrants coming to Cyprus from Turkey, and the coronavirus, are creating friction between the Cyprus republic and the Turkish-Cypriot north.

The flow of economic migrants and Syrian refugees from the Turkish mainland via the north or in boats has risen steadily in recent years and dramatically since January.

Cypriot president Nicos Anastasiades described the influx as “an organised and increasing flow of migrants” into the republic and called on the Turkish Cypriots to assume responsibility for refugees and migrants travelling through Turkey to the north’s airport.

“We acknowledge human suffering. But at the same time, we must take measures against efforts to alter the demographic character of our country, ” Mr Anastasiades said.

Of the 850,000 inhabitants of the republic, the vast majority are Greek Cypriot.

Turkish-Cypriot leader Mustafa Akinci denied the north was deliberately aiding migrants and refugees to cross into the republic but contended that of those who did, the majority went through “illegal channels” guided by traffickers.

Migrants from Africa and Asia often register at Turkish-Cypriot universities and are smuggled into the republic once they arrive in the north or complete their studies.

Among European Union member states, the Cyprus republic has the largest per capita population of migrants, refugees and asylum seekers. This number has multiplied five-fold since March 2016, when the EU reached an agreement with Turkey to retain Syrian refugees in exchange for financial aid.

Nicosia fears Turkey’s effort to push migrants into the EU through Greece could lead to a further rise in numbers. More than 320 arrived this week, most from from Africa, although a boat carrying 101 Syrians docked on Tuesday. On average 1,000 asylum applications are received by the authorities monthly.

The second issue creating tension is the temporary closure of four of the seven gateways between the republic and the north. Strict health screening of those entering the republic are taking place at the open crossings.

This measure, designed to prevent the spread of the coronavirus, has been put in place due to the presence in the north of 3,000 Iranian students, who travel between their d homeland – where there have been more than 3,500 confirmed cases of the disease – and Cyprus.

Mr Akinci criticised Mr Anastasiades for taking a unilateral rather than a joint decision. This is the first time crossings have been closed since 2003, when Turkey permitted traffic between the republic and the north.

The unilateral closures undermine Mr Akinci’s credibility at a time he is standing for re-election in the April presidential contest. He is a sharp critic of Ankara’s efforts to impose conservative religious practices on the secular Turkish Cypriots and accuses Turkey of seeking to annex the north, which it occupied in 1974 following a failed coup in Greece.

1 Face masks: All you need to know about where, when and why you need one
2 Coronavirus: Unwinding of latest stage of roadmap ‘could be pushed back further’
3 Like ‘a grandfather at the sherry cabinet’: Trump’s meandering monologue
4 UK accuses Russia of election interference and trying to steal Covid-19 vaccine
5 Coronavirus in Ireland: Further reopening delayed amid 'worrying' rise in infection rates
Real news has value SUBSCRIBE