Quality of life is a tricky concept. But household wealth is a waving red flag 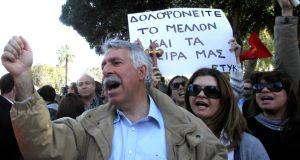 Classically educated Greek Cypriots compare the European financial aid package to the Ides of March 44 BC murder of Julius Caesar by his former friends. Cypriots feel wounded and outraged and, at the same time, confused and disappointed. After all, Cyprus held the EU presidency – as Caesar occupied the consulship – just before being stabbed in the back.

Cypriots blame their politicians, notably clueless president Demetris Christofias and ministers of the former communist government, and greedy bankers, for exposing citizens to the loss of hard-saved deposits and predict the collapse of the economy.

But, above all, Cypriots accuse Eurogroup northerners of ambushing southern Cyprus with a regime that is more bail-in than bailout while imposing harsh austerity measures on a shrinking economy that needs stimulus rather than retrenchment.

Cypriots believe euro zone policymakers chose to experiment here because it is a small southern country with a population of only 840,000. Bludgeoning larger economies could harm northern interests.

When German commentators began speaking of a “wealth tax” rather than bail-ins, Cypriots realised they have been subjected to a raid on deposits which has little or nothing to do with Russian oligarchs, money-launderers and tax dodgers who were said to have deposited ill-gotten billions in Laiki Bank and the Bank of Cyprus, the republic’s two largest bank.

Since the mid-March debacle, Cypriots have begun to read the fine print. The publication last week by the European Central Bank of a study of household wealth in euro zone countries proved to be an eye-opener.

They realised suddenly that politicians of hard-line Germany, Holland and Finland had anticipated their constituents’ anger over the study and homed in on Cypriots whose household wealth is far greater. These politicians realised that their constituents would be furious if they felt they were being taxed to benefit Cypriots – even though the money is loaned not gifted.

The ECB calculated that median wealth of Cypriot households was €267,000 as compared with €51,000 for households in Germany, which was relegated to the bottom of the list. To unnerve the Germans even more, the other four countries involved in bailouts — Ireland, Greece, Portugal, and Spain – enjoy greater wealth than Germany.

The main reason is 77 per cent of Cypriots own their own homes while less than half of Germans do. Other factors include household size, house prices and the prevalence of family businesses.


Pro perty ownership
Home ownership is high in Cyprus because parents with daughters are expected to present them with a house on marriage. On the eight-house, middle-class street in Ayios Dhometios, the 2,000-year-old village suburb of Nicosia where I live, three upstairs flats are dowry houses built by the labour of families. The flat I rent belongs to my landlord’s elder daughter who lives in London while the flat downstairs is deeded to his younger daughter, a businesswoman based in Boston.

My octogenarian landlord and his wife, both teachers, lost their savings.

Like most peoples who dwell in the eastern Mediterranean, Cypriots traditionally invest in land. But since Turkey invaded and occupied 36 per cent of the island in 1974, land has been a less attractive proposition.

Since domestic opportunities for investment are few, many Cypriots with modest means put their savings into stocks, bonds and deposits in the banks targeted for demolition or deposit levies.

Cypriot household wealth combined with the famed Mediterranean lifestyle seems to have created what could be called an “envy factor” in the calculations of the northern members of the Eurogroup.

Northerners who holiday here have tracked the transformation of this relatively poor country into a prosperous land.

Comfortable Cypriot households with a high quality of life may have been too much for dour northerners to bear, particularly since the former government had spent the country into deep debt and the banks were both mismanaged and reeling from exposure to Greece, thanks to the Greek Cypriot penchant for involvement with a motherland that causes them only grief.